Walker's Transportation plan? "...looking ahead...are there ways...whether or not the project...looking at trends..." blah, blah, blah.

Well, it's out finally, Scott Walker's next two year plan to solve the transportation debacle:

Whew, that was close. Thank god he listened to concerned constituents and every business leader in the state. I'm just happy to clear this one of my list of...oh wait, not again.

Two more years of nothing.

In a revealing WPR news series by Shawn Johnson, Wisconsin's road disaster is obvious to everyone but Walker and most of the Republican legislature.


The Illinois side of the interstate is six lanes of concrete, three lanes in each direction. It’s flat, well-lit and finished. As drivers cross the state border on their way to Wisconsin, they immediately merge to a four-lane highway. The pavement is rougher. Construction equipment sits dormant for winter. Chunks of concrete and rebar litter some ditches.

"It's funny, when you cross the Wisconsin border, there might as well be a sign saying here's where the modern highway infrastructure ends," said Dan Cunningham, vice president of the group Forward Janesville. "You get to Illinois and it's just three lanes of really smooth traffic heading down to Chicago. And then you get into Wisconsin and it's ca-chunk, ca-chunk, ca-chunk."

Truck driver Bob Schroeder, who lives in Manitoba, said he sees problems. "From here to the Dells it needs attention," said Schroeder. Schroeder hauls expensive RVs and said he worries about getting them home undamaged. Still, he said he’s not about to avoid this stretch of highway.

Under Walker’s proposed 2017-19 budget, one big project that has long been a priority of business groups would be cut: an expansion of Interstate 94 west of Milwaukee between the Marquette and Zoo interchanges. Other projects, like an expansion of I-94 south of Milwaukee, would be significantly delayed. Even the plan to make I-39/90 six lanes — which is underway — will take at least another five years to complete under the Wisconsin DOT’s timetable.

What could the state do to solve the quick deterioration of our roads?


The 1979 report that warned Congress of the damages of heavy trucks also included some recommendations along those lines. "While there are many uncontrollable causes of highway deterioration, such as weather," the report stated, "excessive truck weight is one cause that can be controlled. By strictly enforcing their weight laws, states could virtually eliminate damage caused by overweight trucks."

That hasn’t happened in Wisconsin. While the state’s highway inspectors are busy, and state-of-the-art scales help them work faster than ever before, the state has eschewed a zero-tolerance approach when it comes to overweight trucks.

So what did Republicans do about excessive truck weight ripping up our roads?


Republican Sen. Alberta Darling, the committee’s co-chair, said in 2013, "Someone could think that they are within the boundaries of the weight and then find out they're not and then get slapped with a terrible fine. We think sometimes there has to be more consideration and flexibility."

Soon after, the full Legislature passed a new law increasing the weight limit for agricultural equipment on Wisconsin roads by 15 percent to 92,000 pounds. The latest rewrite of that law passed the Legislature unanimously, and meanwhile, heavy agricultural equipment on local roads remains a challenging issue in some parts of Wisconsin where large livestock farms are more common.

There you go. And with the GOP's no tax pledge to Grover Norquist, forget about extra funding for transportation. Check out Johnson's latest story: 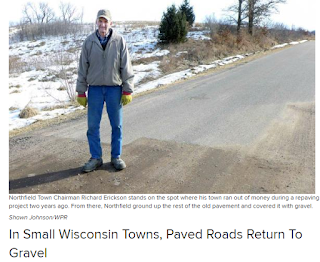