With almost no fanfare whatsoever, there was an important debate in Wisconsin yesterday:


Incumbent Superintendent Tony Evers and challenger Lowell Holtz, sparred over Wisconsin’s teacher shortage and the effect of President Donald Trump’s proposed budget would have on the state’s professional development Tuesday in Milwaukee.

Evers once again defended the teaching profession, which is a really odd thing to have to do if you just think about it: 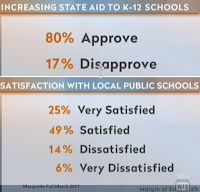 Evers blamed the state's shrinking teacher supply on Act 10. Evers said a key to refilling the teacher pipeline is making sure high school students understand the importance of the profession.

Holtz had already said that instead of working with the 400 school district that have adopted Common Core, he would work with the legislature, an anti-education body that has for years tried to break up public education.

Now he said he backs Trump's plans for choice...

Holtz, who has courted conservative support, argued the GOP-backed Act 10 is not the problem ... teachers' frustrations with the state's evaluation system ... and that he didn't have many reservations about President Trump's proposed budget.

The Trump administration's budget blueprint would include $1.4 billion in new money for school choice, but it would get rid of Title II, the $2.3 billion main federal program for improving teacher quality, and the 21st Century Community Learning Center program, a $1.1 billion program which helps finance afterschool and extended-day programs. Private and charter schools receive funding, or at least services, from both programs. Here's a breakdown of how that works:


Private Schools: Private schools benefit from federal dollars, particularly Title II, although the process is a bit more complicated … Here's how it works: District receive money from Title II—which can be used for class-size reduction, professional development, retention bonuses and more. But private schools with high-poverty populations are supposed to be able to take advantage of the dollars too. And districts have to consult with private schools in their area about how they want the dollars used—they can't just make the decision for them.

And the amount of Title II funding going to private schools isn't chump change, at least in places that have embraced school choice in a big way. In Wisconsin, for example, home to a long-standing voucher program, nearly 25 percent of the state's roughly $25 million in Title II funding goes to private and parochial schools, or about $5 million total, said Tony Evers, the state chief.

The cuts, particularly to Title II funding would hit private schools the same way it would hit public schools.

Charter Schools: Some states treat charter schools or networks of charters as separate school districts. That means, if they qualify for federal grants, like Title I, Title II, career and technical education money, or something else, they get it, under the same set of rules as traditional public schools.

The share of Title II dollars going to charters isn't trivial. In California, for example, it's about 10 percent of funding, or an estimated $23 million of the state's roughly $234 million in Title II funding. The newly passed Every Student Succeeds Act which passed in 2015, puts a special focus on using the money to replicate high-performing charters. If the new dollars are approved by Congress and directed to those efforts, existing charters might not see much of it.