The news media is slowly catching on to the Republican plan to make unemployment benefits a thing of the past, handing big business a huge but little talked about tax cut.

Scott Walker has put Wisconsin on the front line of states trying to end the very program we created back in 1932, unemployment insurance. And it's a double edges sword, because Walker has also tied these reforms to a work requirement and drug test for food stamp recipients. They go hand in hand:

Governor Scott Walker on Wednesday, May 4th 2016 approved a rule requiring certain Wisconsinites receiving unemployment insurance benefits to pass a drug test. Gov. Scott Walker would also extend the requirement that people work 80 hours a month to receive food stamps to parents of school-aged children. It would also move forward with drug testing as a requirement for food stamp recipients.

But as a recent story on WPT's Here and Now explained, the unemployed and hungry aren't trying to scam the system or use the benefit programs as a hammock. Instead, they're getting hammered and shut out of both programs because of hoops, barricades, red tape and burdensome regulations by "small government" Republicans on purpose. Are any of the people in the story below lazy?

In December 2015, the state departments of Justice and Workforce Development announced they were cracking down on unemployment fraud.

Worker advocates say that this crackdown is increasingly going after people ... who find themselves before a judge, facing fines and even criminal charges for honest mistakes or even the mistakes of state workers. The Department of Workforce Development seems to want to prevent anyone from getting benefits. Victor Forberger, an attorney who specializes in unemployment issues and keeps a blog monitoring the state’s new efforts (said) “They’re not trying to stop mistakes; they’re trying to make it worse.”

So to cut taxes for businesses, Walker is going to make it impossible for employees to collect unemployment benefits.

In the 2013-15 budget, Gov. Scott Walker created substantial fault — for when people can be fired and not collect benefits ... if someone has more than one job and quits one of them, they are now ineligible to collect unemployment for the next year if they’re laid off from another job ... “You’re penalizing people who work more than one job, and it undermines the entire system of unemployment.”

In a 2015 law, the state changed what it means to “conceal” income while receiving unemployment benefits ... the new law said the state no longer has to “prove that a claimant had an intent or design to receive benefits to which the claimant knows he or she was not entitled.” Now, honest mistakes can lead to fines and criminal charges.

Fraud is almost nonexistent. But that's not the point:


A December 2014 report by the Legislative Audit Bureau found that only 9.5 percent of the overpayments between 2011 and 2014 was the result of people intentionally trying to defraud the state. The rest, 90 percent, were due to unintentional mistakes or department errors.

I blogged awhile ago about the states use of taxpayer money to fill the unemployment funds deficit hole after the great recession so businesses wouldn't see an increase in taxes. Much of that money never came back. The story received almost no attention. 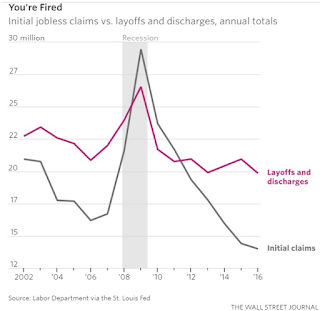 There is a growing gap between the number of workers losing their jobs and the number applying for unemployment benefits ... Heidi Shierholz at the Economic Policy Institute said, “So there is something else putting downward pressure on claims.”

That “something else” could be more than one thing, not all good—such as tenuous work arrangements or difficulty applying for benefits.

The National Employment Law Project, a nonprofit research and advocacy group, also has tracked the decline in unemployment claims. “In general, we’re concerned that significant numbers of involuntarily unemployed workers are being prevented from receiving benefits to which they may be entitled, especially workers with labor market disadvantages like limited English proficiency, limited experience with computer technology, limited literacy,” said Claire McKenna, a senior policy analyst at NELP.

For example, states that shift to online claims filing from telephone filing may be locking out of the application process people who don’t have ready access to the Internet or the kind of documentation needed to qualify.