Going to a free market health care system with no minimum coverage requirements and lots of exclusionary small print you’d need a lawyer to understand, sounds crazy, especially when every other country in the world not only thought it was a bad idea, but it was also immoral.

Now many Republicans oppose helping Americans pay their premiums with a tax credit, a deduction or subsidy because that would be an entitlement with the GOP’s stamp of approval. 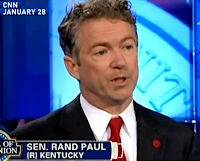 Paul has introduced his own version of a replacement, in calling for a total repeal of the ACA. They argue that refundable tax credits are just another entitlement program. That means more federal spending. “Renaming and keeping parts of Obamacare, new entitlements and extending Medicaid expansion are not the #FullRepeal we promised. Conservatives aren't voting for that (the credit). So I think we should just brush that off the table.”

Adam Brandon, the president of FreedomWorks, a tea party-aligned group, said the House Freedom Caucus would rather lose than vote for a brand new entitlement that in their heart of hearts is not the answer.

Which would make health insurance once again…unaffordable.

Republicans will counter that you will still be able to buy a plan you can afford, you know, with nothing really covered...but you'll still have to make a monthly premium payment. Basically a junk policy.


Paul also wants a bill calling for a full repeal, and a separate bill for reform, which would leave the U.S. without anything until reform is passed.  I'm guessing that will never happen. Not good, right?
Posted by John Peterson, Democurmudgeon at 3/03/2017 12:12:00 PM