The CBO's reality check on the Republicans first ever free market approach to a national health care plan in the world is about to be released. The CBO's past reports over their plan to repeal the Affordable Care Act has become a festering sore no doctor can cure.


18 million people could lose their insurance within a year and individual insurance premiums would shoot upward if Congress repealed major provisions of the Affordable Care Act while leaving other parts in place, the nonpartisan Congressional Budget Office said on Tuesday.

If nothing followed the gutting of President Obama’s signature domestic achievement, the budget office said, 32 million people could lose their health insurance by 2026, and premiums in the individual insurance market could double. 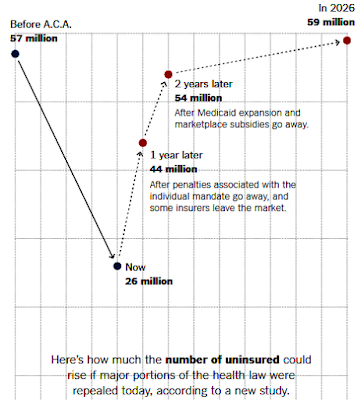 “Eliminating the mandate penalties and the subsidies while retaining the market reforms would destabilize the nongroup market, and the effect would worsen over time,” the budget office said.

The office said the estimated increase of 32 million people without coverage by 2026 resulted from three changes: About 23 million fewer people would have coverage in the individual insurance market. Roughly 19 million fewer people would have Medicaid coverage. And there would be an increase in the number of people with employment-based insurance that would partially offset those losses.

Trumpian preemption: Sean Spicer deceptively twisted reality again, this time about past CBO predictions that he said were way off.

That's just not true when you look at their updated 2012 estimate, and not just the original 2010 estimate. On the cost and taxes, the ACA saved even more money than the CBO estimated:

...and who cares about accurate numbers, when "good policy" is all that matters?

Jeffrey Anderson, a Hudson Institute scholar, for the Weekly Standard: “The CBO’s score will most likely be wildly off, [and] most Americans don’t much care what the CBO thinks. Those who debate and pass legislation should focus on whether it would be good policy ... not on the grounds of the CBO’s generally dubious scoring.”

The CBO predictions didn't account for the stunningly over the top criticism and outright lies about the new health care law that ended up discouraging hundreds of millions of people from trying it out. Most of the reported individual horror stories were debunked when ACA victims learned the truth about signing up and what they would actually save:

Spicer based his criticism of the CBO on the fact that the office estimate in 2010 that 24 million people would acquire health insurance. Only 9 million people are covered in the exchanges now, however.

Grover Norquist, president of Americans for Tax Reform, said he would give more weight to a CBO analysis of a tax cut than he would to one of how many people would be insured under a bill, because the latter delves into predicting consumer behavior. Ironically, conservatives have long complained that the CBO did not take human behavior into account when scoring tax bills, and in 2015 passed a rule requiring the CBO to use what’s known as “dynamic scoring” on tax legislation.