The brutal vindictive nature of Office of Management and Budget Director Mark Mulvaney's comments are still sinking in for many:


Mulvaney: "...focusing on the recipients of the money and the folks who give us the money in the first place."

No, the focus is on the "givers," because it's clear the recipients are getting cut off...the recipients being senior citizens using Meals on Wheels.

Nothing said class warfare more than telling a single parent they should be resentful of a senior citizen using their taxes for Meals on Wheels.


Soglin: "The statement that these are programs that aren't working is just plain stupid, and I really believe it's driven by a right wing political ideology. That the taxpayers can't afford it is bullshit." 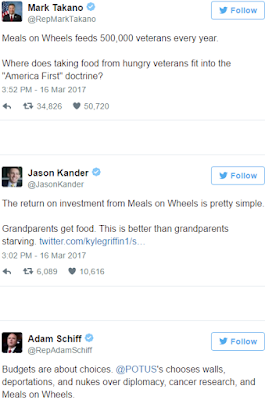 Despite Mulvaney’s claim, a peer-reviewed analysis of eight studies in 2013 found that six of them found “home-delivered meal programs to significantly improve diet quality, increase nutrient intakes, and reduce food insecurity and nutritional risk among participants. Other beneficial outcomes include increased socialization opportunities, improvement in dietary adherence, and higher quality of life.”

Some food recipients are in their 90s and fairly isolated, without any other relatives to help care for them ... drivers develop a rapport with the senior citizens and check on them if they their routine is thrown off and they do not answer the door.

“They have nobody but us. We’re the only contact that they have with another human being ... There have been a lot of times when my drivers have found these people on the floor after a heart attack or stroke. Without us being there to see it, they could lie there for hours and possibly pass away before somebody would notice them.”

The eye opening cold cruel week continued with this jaw dropping defense of a half million dollar tax cut for the insurance CEO's making out like bandits under a "free market" health care system. Price first denied it was in the reform bill, before realizing it was, and for good reason (he thinks). NOTE: There's nothing free market about insurers setting prices with doctors and hospitals for care - there's no competition between insurers because their negotiations are confidential. There wasn't any before the ACA.

Sen. Elizabeth Warren laid it out for everyone to understand:

It is only the Republicans who can come up with this kind of double speak. There is nobody in America who thought that knocking millions of people of their health insurance was the way that we were going to improve health care."

One pundit warned Republicans that their constituents, who didn't know they were on the ACA or Medicaid program, who no soon enough what has happened to them.

Here's Vox's Ezra Klein with a total look at the problem: