Trump focused on his reelection, not horrific and Deadly GOP health care law.

We knew going in that Trump was a sociopath with the attention span of an ant, according to the author of his book, "The Art of the Deal:"


If he could do it over again, however, Mr. Schwartz said the book would be titled “The Sociopath.”

“I feel a deep sense of remorse that I contributed to presenting Trump in a way that brought him wider attention and made him more appealing than he is. I genuinely believe that if Trump wins and gets the nuclear codes, there is an excellent possibility it will lead to the end of civilization.”

Well, on a smaller scale, at least in this country, Trump would have pared down civilization.

It's about Trump, NOT Health Care: I'm going to call it the Trump rule, where everything coming out of the White House is for the benefit of the great and wonderful wizard Trump. The following sociopathic statement from Trump even shocked the tea party ghouls pushing profits over human life: 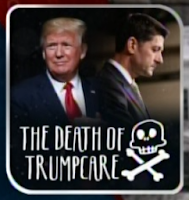 Politico: It was Thursday afternoon and members of the House Freedom Caucus were peppering the president with wonkish concerns about the American Health Care Act—the language that would leave Obamacare’s “essential health benefits” in place, the community rating provision that limited what insurers could charge certain patients, and whether the next two steps of Speaker Paul Ryan’s master plan were even feasible—when Trump decided to cut them off. "We’re talking about one-fifth of our economy," a member told me afterward ... according to multiple sources in the room:

"Forget about the little shit, let's focus on the big picture here."
Trump wanted to emphasize the political ramifications of the bill's defeat; specifically, he said, it would derail his first-term agenda and imperil his prospects for reelection in 2020. The lawmakers nodded and said they understood.