Imagine giving out your genetic code to a Target store, a grocery store, Sam's Club or Costco, just so you could get a discount. How would that make you feel?


In the 1997 film Gattaca, the protagonist is unable to pursue his dream job because of his “sub-optimal” genetic makeup. 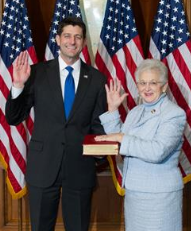 Tea party Republican Rep. Virginia Foxx is sponsoring H.R. 1313, the “Preserving Employee Wellness Programs Act,” which would coerce employees into giving up their genetic information for a discount on their insurance.

In time, insurers will be able to use the information not just to give discounts for wellness programs, but to raise premiums on genetically risky customers.

Your genetic code would then be simply marketing information, and not highly private and sensitive medical information protected by Health Insurance Portability and Accountability Act (HIPAA). And while there are already privacy protections in place, the Genetic Information Nondiscrimination Act (GINA) and the Americans with Disabilities Act (ADA) as they relate to employee wellness programs, those protections don't exist under the ACA, while it still exists.


Under the proposed bill, health insurers and employers could simply comply with the Affordable Care Act to gain access to employee health data for use in wellness programs.

According to a Winston-Salem Journal editorial:


The Post reported; if enacted (it) would undermine basic privacy provisions of the Americans with Disabilities Act and the 2008 Genetic Information Nondiscrimination Act, or GINA. Congress passed GINA to prohibit discrimination by health insurers and employers based on the information that people carry in their genes. There is an exception that allows for employees to provide that information as part of voluntary wellness programs. But the law states that employee participation must be entirely voluntary, with no incentives to provide it, or penalties for not providing it.”


StatNews: Tom Price, the secretary of Health and Human Services, was asked about the bill on NBC’s “Meet the Press” over the weekend.


“I’m not familiar with the bill, but it sounds like there would be some significant concerns about it.”

Do I have to say it again? How can we allow, with a clear conscience, a profit making business to stand between a doctor and their patient.
Posted by John Peterson, Democurmudgeon at 3/18/2017 02:19:00 PM