Health Care for Americans loses out to Tax Cuts for the Wealthy by brutal GOP.

It's hard for me to imagine the cruel dedication Republicans have for money, profits, and capitalism. Not even our God given earthly bodies, with all our God given rights, can't compete with the almighty dollar. Check out the last line in this screen grab: 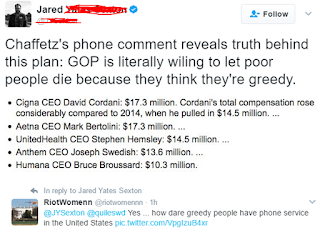 I though it was just me, picking up on something I imagined. Nope, others are seeing it too, what should be painfully obvious to everyone.

This beautifully poignant comment by Congressman Joe Kennedy III brought it all together for me. From The Boston Globe:


"I was struck last night by a comment that I heard made by Speaker Ryan, where he called this repeal bill 'an act of mercy.' With all due respect to our speaker, he and I must have read different Scripture…The one I read calls on us to feed the hungry, to clothe the naked, to shelter the homeless, and to comfort the sick. It reminds us that we are judged not by how we treat the powerful, but by how we care for the least among us. There is no mercy in a system that makes health care a luxury. There is no mercy in a country that turns their back on those most in need of protection: the elderly, the poor, the sick, and the suffering. There is no mercy in a cold shoulder to the mentally ill. This is not an act of mercy. It is an act of malice."

With the same message, the Center For American Progress's Neera Tanden: Cuts taxes for wealthy, a redirection of wealth benefits:

And from former Kentucky Governor Steve Beshear, who I thought wisely state the Democratic case for keeping the ACA, why it's not just a shift in wealth but also a program of roadblocks keeping people away from health care:


Beshear: "These folks, they amaze me. Their ideology, their rigid ideology and all of their policy are making them to forget about what we're really talking about, that's human beings, that's lives...these are people, some of them are going to die if their coverage is taken away from them. Doctors tell you this, this is a real situation. This is life and death for millions of Americans..."