Chaffetz on TrumpCare choices: "...so maybe rather than getting that new iPhone...invest in health care."

The public face and the private two-face is a wonder to behold.

When we hear a Republican say something "in-artfully" bad, imagine what they're saying behind closed doors.

Enter Rep. Jason Chaffetz, a guy who gets his health care paid for by taxpayers, and makes $174,000 a year. He won't have to make any difficult decisions about either buying health insurance or...an iPhone:


Chaffetz: "Americans have choices. And they've got to make a choice, and so maybe rather than getting that new iPhone that they just love, and they want to spend hundreds of dollars on, maybe they should invest in their own health care? They've got to make those decisions themselves."

Yes, he actually said that in public. Imagine what his fellow Republicans are saying behind closed doors. Of course Chaffetz doesn't realize that people don't buy iPhone's every month, because an iPhone is basically equal to just one monthly premium.

He didn't stop with that morsel either....

Exposed. That's fair? They know people will get less insurance coverage. So enjoy paying monthly premiums that will go up year after year.

Always remember the GOP talking point about ObamaCare, "when the cost and deductibles go up," because their free market insurance plan will be much much worse. 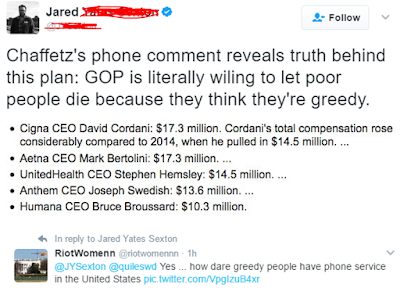 Democrats are not there yet. This safe and easy to predict outcome is still not something the Democrats feel comfortable weaponizing. It's a stunning missed opportunity.