Walker "qualifies" Jobs Promise..."not how many jobs...it's how many people are there to fill them."

See what happens when you let Scott Walker get away with one major line of BS? He can say anything now...

Walker's campaign promise to create 250,000 jobs during his first term was flat out ridiculous, beyond ridiculous, impossible. No one with an ounce of integrity would have made that claim. Yet Walker did, and surprisingly, voters bought into it hook-line-and-sinker. Walker won based on that single promise. A few years later, Walker repeated his promise based on anecdotal BS from corporate CEO's. This was posted at Office of the Governor Scott Walker: 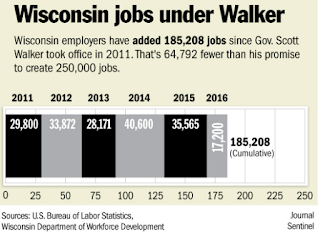 Ah, Never Mind? Is there any doubt Walker is a conniving career politician?

Gov. Scott Walker is brushing off a Milwaukee newspaper article claiming Wisconsin is about 60,000 jobs short of his 2010 promise to create 250,000 private-sector jobs in four years. He's adjusted that pledge...

"I qualify that now saying ... I got more people employed than ever before ... it's not how many jobs are created, it's how many people are there to fill them. And so, I've shifted from that, and said my number one issue is workforce. I need to find those people."

Walker will find them leaving for other states:


Economists quoted in the Milwaukee Journal Sentinel article on Sunday said Wisconsin suffers a "brain drain" of college graduates to other states, and that Wisconsin needs to focus on improving the pay of current jobs. 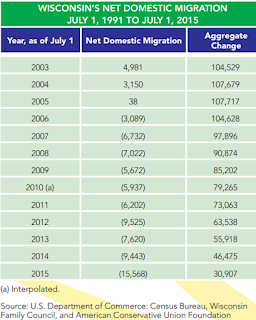 Walker committed to Manufacturing Renaissance! Would I kid you? It was always painfully obvious that U.S. manufacturing was not coming back. But Walker wasn't having it, no matter how many experts and Democrats said otherwise:


Wisconsin's ranking was unchanged from a revised rank of 33rd for job creation, last in the nation for the second year in a row in terms of start-up business activity.

After 6 years, Walker is now reacting as if he'd discovered something new, acting like we were all just as backward as his administration, thinking tax cuts, out of state recruitment, tax free manufacturing...etc. would make Wisconsin a manufacturing mecca again:


Retired executive and business climate analyst John Torinus, who advised Walker on the original jobs pledge, said: "We know now that recruiting from out of state doesn't work. We know that manufacturing is automating and leaning so rapidly that it will not be an engine for job growth, even though its exports help the state's wealth creation greatly. Ditto for agri-business, the other major platform for the Wisconsin economy."

Most new job and economic growth will come from start-ups, Torinus said, adding that "we are doing better on that score" in part due to state tax credits.

And while Walker continues to blame former governor Jim Doyle for the Great Recession, Doyle's recovery efforts would have resulted in higher monthly job growth than our duped business friendly Walker. Check out Political Heat for the complete analysis: 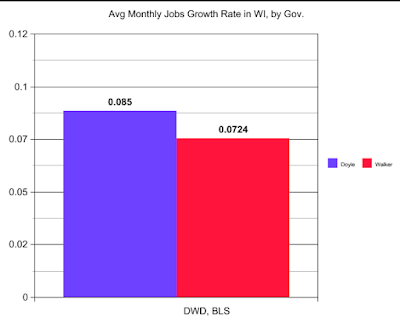 The MacIver Institute: Matt Mitchell, a Senior Fellow at the Mercatus Center at George Mason University, looked to see if government incentives were all they cracked up to be. He discovered that states with more incentives per capita actually have slower real economic growth.

"If local subsidies worked as advertised, we'd expect to see greater economic growth in those states that give away more subsidies. But simple analysis of [Louise] Story's data suggests that, if anything, there is a negative  relationship between per capita subsidies and economic growth. Experts argue that offering these massive incentives are actually an admission of failure. A state with a great business climate should be able to attract business without the need for extra incentives."