First, let's take a look at one of Trump's biggest promises, really big promises; lowering the price of health care:


Here's another "promise" to lower the cost of health care, the free market way, and get better coverage? Didn't Republicans say ObamaCare coverage was already to comprehensive? Note: The Huffington Post included "Dubious Claim" in the title, not in paragraph 8 of the article: 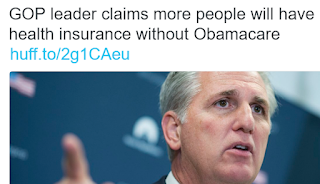 House Majority Leader Kevin McCarthy Makes Dubious Claim That More People Will Have Health Insurance Without Obamacare. And coverage will be better. And people with pre-existing conditions will still get coverage.  Asked how Republicans could be confident premiums wouldn’t skyrocket if they repealed the 2010 Affordable Care Act, McCarthy told reporters it came down to a “philosophical difference of belief.”


“We believe with more people into the market, you get greater choice and that the demand is higher. You allow those that can’t afford it to enter the same market where they have more options, that the price will go down.”

Wow, I know health care, and I have no idea what he's talking about.

I'd like to point out that when you need health care services, one important consumer element is missing; you can't say, no, that's too expensive.


Ryan: "So that we can actually get people more choices, lower prices, so that everyone can get comprehensive, quality healthcare regardless of whether you have a pre-existing condition or not," he said.