Nearly two years after John Scocos, a Republican and U.S. Army Reserve colonel was fired as state veterans secretary, Gov. Scott Walker has reappointed him to his old job. Scocos took an organization that performed admirably under his predecessor, Secretary Ray Boland, and planted the seeds of dysfunction and acrimony. He demonstrated no ability to administer, manage or lead.  DAV received reports that he did not coordinate the activities of his department managers in a positive manner, but instead his poor management style pitted them against one another. Scocos wasted valuable time attacking perceived enemies.  Some DAV officials, when making suggestions to better the lives of veterans, felt his wrath instead of his gratitude.

Paul Ryan to Scott Walker's Rescue: Unlike Walker's mismanagement of the states juvenile detention system and our crumbling highways, Paul Ryan can rescue Walker from his horrific treatment of veterans, with burdensome big government one size fits all Washington bureaucracy.

Suddenly, Walker no longer has to be accountable locally for managing his own states veterans secretary, who was so bad he was fired the first time. From WPR's Central Time (audio): 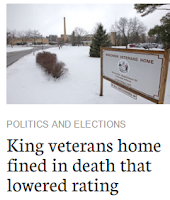 Ryan: "They cannot have the kind of discipline and management restructuring that is necessary to get this place whipped into shape. That is why we think we need to have more wholesale reform at the Veterans Administration so they can really actually hold people accountable...changing the law so we can fire people who need to be fired."

Oh, like the once fired State Veteran's Secretary John Scocos who just resigned?