The right wing authoritarian movement is now in full bloom with the election of Trump. And what better way to prove that then with this eye opening look at North Carolina's grossly manipulated elections. 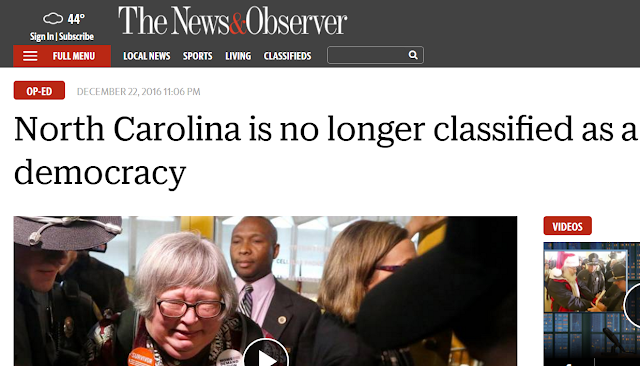 Republicans own this. This is their vision of fair elections. But does it really give voters confidence in their elections? This is going on across the country, and it's getting worse every year:

Andrew Reynolds and Danish colleague Jorgen Elklit, designed the first comprehensive method for evaluating the quality of elections around the world. Our system measured 50 moving parts of an election process and covered everything from the legal framework to the polling day and counting of ballots.

Pippa Norris of Harvard University, who used the system as the cornerstone of the Electoral Integrity Project. Since then the EIP has measured 213 elections in 153 countries and is widely agreed to be the most accurate method for evaluating how free and fair and democratic elections are across time and place ... I could never imagine that as we enter 2017, my state, North Carolina, would perform so badly on this, and other, measures that we are no longer considered to be a fully functioning democracy.


1. In the just released EIP report, North Carolina’s overall electoral integrity score of 58/100 for the 2016 election places us alongside authoritarian states and pseudo-democracies like Cuba, Indonesia and Sierra Leone.

2. If it were a nation state, North Carolina would rank ... only slightly ahead of the failed democracies that constitute much of the developing world.


3. Indeed, North Carolina does so poorly on the measures of legal framework and voter registration, that on those indicators we rank alongside Iran and Venezuela.

4. When it comes to the integrity of the voting district boundaries no country has ever received as low a score as the 7/100 North Carolina received. North Carolina is not only the worst state in the USA for unfair districting but the worst entity in the world ever analyzed by the Electoral Integrity Project.

That North Carolina can no longer call its elections democratic is shocking enough, but our democratic decline goes beyond what happens at election time. The most respected measures of democracy — Freedom House, POLITY and the Varieties of Democracy project — all assess the degree to which the exercise of power depends on the will of the people: That is, governance is not arbitrary, it follows established rules and is based on popular legitimacy.

The extent to which North Carolina now breaches these principles means our state government can no longer be classified as a full democracy.