The odd game of one party's egomaniacal majority redefining, even changing, the Constitution to fit their ideological agenda runs counter to their claims of being "strict constitutionalists." Thus, 32 Republican states have passed, and are still pushing for a "constitutional convention." They just need two more:


As laid out in Article V of the Constitution, two-thirds of the country's state legislatures can call for a convention to amend the Constitution. Any amendments passed in such a convention would then have to be ratified by three-fourths of the states to take effect. it could be used to pass a balanced-budget amendment and to impose term limits on members of Congress and the judiciary.

Republicans now hope to take advantage of the myth they've created around themselves of being fiscally responsible, by inserting the downright stupid "balanced budget" amendment into our Constitution. More on why this is so dumb is below.

Blissfully getting behind the numbskull ideas of a constitutional convention and balanced budget amendment? Who else, Scott Walker. It's not like he's has had deep thoughts on these subjects; these are right out of ALEC, so pushing it requires a minimal amount understanding by Walker: 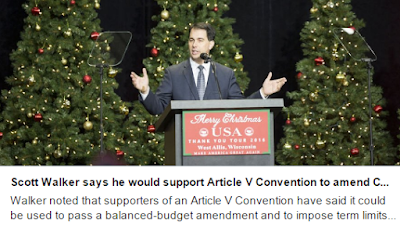 Walker: "The reason I support that is I believe, like our state and other states, that we should have a requirement to balance the budget that you can’t get around."

Yup, a simple solution for a massively complex set of problems, with no escape hatches to "get around" it (more on that highlighted below). The devastating consequences don't bother Walker in the least, because let's face it, he's shown sociopathic tendencies before.

So what could happen? Glad you asked. :

EPI: A balanced budget amendment would mandate perverse actions in the face of recessions. In economic downturns, tax revenues fall and some outlays, such as unemployment benefits, rise. These so-called built-in stabilizers increase the deficit but limit declines of after-tax income and purchasing power. To keep the budget balanced every year would aggravate recessions. Unlike many state constitutions, which permit borrowing to finance capital expenditures, the federal budget makes no distinction between capital investments and current outlays. Private businesses and households borrow all the time to finance capital spending.

A balanced budget amendment would prevent federal borrowing to finance expenditures for infrastructure, education, research and development, environmental protection, and other investment vital to the nation's future well being.

A balanced budget amendment would invite Congress to enact unfunded mandates, requiring states, localities, and private businesses to do what it cannot finance itself. It also invites dubious accounting maneuvers (such as selling more public lands and other assets and counting the proceeds as deficit-reducing revenues), and other budgetary gimmicks.

Disputes on the meaning of budget balance would likely end up in the courts, resulting in judge-made economic policy. So would disputes about how to balance an unbalanced budget when Congress lacks the votes to inflict painful cuts.

Balanced budget amendment proposals typically contain escape hatches, but in peacetime they require super-majorities of each House to adopt an unbalanced budget or to raise the debt limit. These provisions are recipes for gridlock.

An overall spending cap, which is part of some proposed amendments, would further limit Congress’s ability to fight recessions through either the built-in automatic stabilizers or deliberate changes in fiscal policy. Even during expansions, a binding spending cap could harm economic growth because increases in high-return investments — even those fully paid for with additional revenue — would be deemed unconstitutional if not offset by other spending reductions. A binding spending cap also would mean that emergency spending (for example on natural disasters) would necessitate reductions elsewhere, leading to increased volatility in the funding for non-emergency programs.

A Constitutional amendment is not needed to balance the budget. The budget not only attained balance, but actually recorded surpluses and reduced debt, for four consecutive years after Congress enacted budget plans in the 1990s that reduced spending growth and raised revenues. This was done under the existing Constitution, and it can be done again.

No other major nation hobbles its economy with a balanced-budget mandate. There is no need to put the nation in an economic straitjacket. Let the President and Congress make fiscal policies in response to national needs and priorities as the authors of our Constitution wisely provided.

Mix in a Growing National Debt: With Trump's proposed tax cuts, not much different than Paul Ryan's, economists have projected a deficit increase of $5 trillion. That would result in a Republican move to dramatically cut all spending. And that would lead the US to what Naomi Klein called the "Shock Doctrine."


That practitioners of the shock doctrine tend to seek a blank slate on which to create their ideal free market economies, which inevitably requires a usually violent destruction of the existing economic order.

As for the question of a constitutional conventions rewriting the Constitution, Walker has another simple but definitive response:

"Some have said, 'Well if you do that, doesn’t it open the floodgates to all sorts of wild ideas?' And the answer to that is no,"

Constitutional scholar and wreaker of havoc Gov. Scott Walker is wrong about that too, but why complicate things:

“Once you open up the Constitution to change at a convention, then you can change anything in the Constitution,” said Michael Leachman at the left-leaning Center on Budget and Policy Priorities, a think tank that has written about the dangers of a balanced budget amendment. “It’s theoretically possible.”

Possible? Just to be clear:


Jenni Dye, research director for the liberal group One Wisconsin Now, said Walker and state Republicans "cannot be trusted with our Constitution."

"We have already watched as this gang decimated voting rights using state law, just imagine the damage they could do if they start rewriting our Constitution. They will put party before patriotism, and they do not care what they break on their quest to permanently consolidate power. If they are allowed to break the Constitution itself, we won't be able to put democracy back together."