Trump voters getting cold feet repealing ObamaCare! They should be worried.

It looks like the nearer we get to repealing the Affordable Care Act the more nervous Americans are becoming. There are consequences. But we're not talking about normal thinking individuals here. These are policies forcefully put in place by ideologues.


Poll: Most Americans Want Obamacare to Change. The poll by the Kaiser Family Foundation a week after the 2016 presidential election, 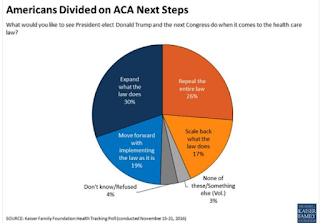 1. Most Americans are opposed to the individual mandate.

Are Americans getting cold feet? They'd be crazy if they didn't. Not only will tens of millions lose their affordable health care, but the private insurance market profits could collapse waiting for Republicans to hatch their latest scheme, and hospitals will once again lose billions of dollars from uncompensated care. Does this sound like a formula for higher care costs all around? Without a doubt.

Check out this amazing revelation for Trump supporters:

Whites and those without college degrees have been among the biggest winners under Obamacare, in terms of gaining coverage, said Linda Blumberg, senior fellow in the Health Policy Center at the Urban Institute. The Urban Institute also found that 56% of the newly uninsured would be non-Hispanic whites. Their uninsured rate would soar to 18%, up from 7%.

Democrats should not get their fingerprints on Repeal or Replace: There's no giving in on this point. If Republicans start by just repealing the plan with or without a replacement, don't touch it:


If Republicans are planning to repeal Obamacare on Jan. 3 and then come looking for help from Democrats to replace it down the road, Senate Democrats have a message for them: It's not happening.

Among leadership and rank-and-file Senate Democrats, consensus is building to stay unified and not cave to GOP pressure to help fix a health care system that Republicans could send into a tailspin with an outright repeal of President Barack Obama's signature health care legislation at the beginning of next year.

The fact that most people get employer provided health care, and aren't really affected by the ACA or understand how insurance works, there's a "magical" kind of thinking about the benefits they love so much... 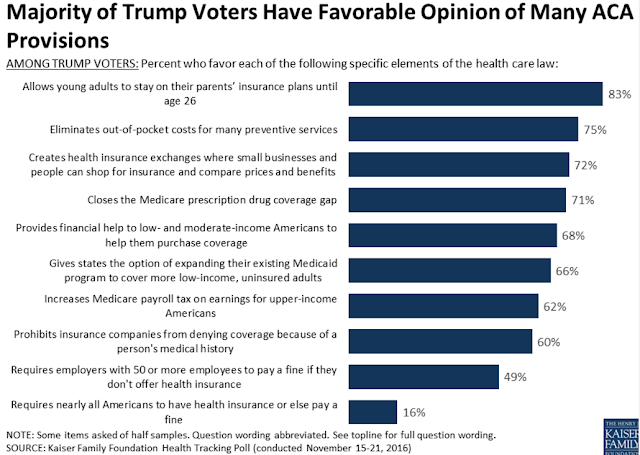 Trump Promise believed Hook, Line and Sinker!!! Among Trump voters, 52 percent say the cost of their health care will get better. Click on the screen capture to enlarge, be amazed: 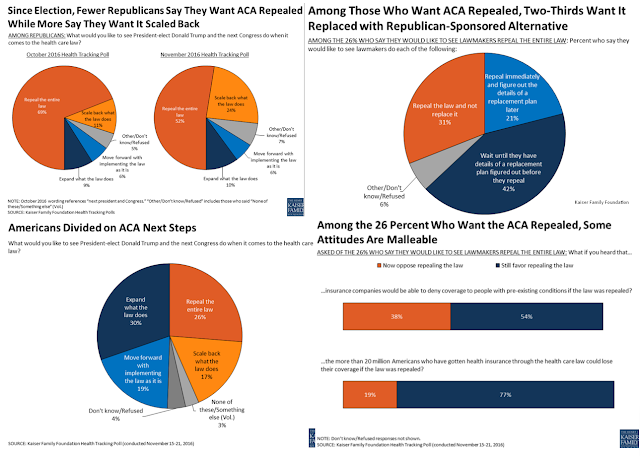