ObamaCare Repeal will be a Huge Tax Cut for the Top 1%.

Not only will Trump's tax reforms benefit the top income brackets most, but repealing the Affordable Care Act will be the obscene cherry on top. That's because the top 1% help fund ObamaCare through taxes. 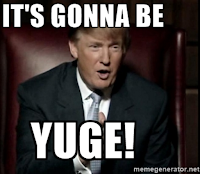 Is Trump looking out for the little guy? Not so much. Many Americans will lose their health care, and many will see much higher premiums and deductibles once ObamaCare's funding source is slashed:


Why do Republicans want to repeal Obamacare so much? Because it would be a big tax cut for the rich. Obamacare was one of the biggest redistributive policies of the last 50 years. The Republican Party, after all, exists for what seems like the sole purpose of reversing redistribution. So undoing Obamacare would undo a lot of taxes at the top, and a lot of subsidies at the bottom.

You can see that in the chart below from the nonpartisan Tax Policy Center. The bottom 40 percent are a good deal worse off, the middle 55 percent are mostly unaffected, and the top 1 percent would do pretty, pretty well. In fact, they'd get an average tax cut of around $32,820. 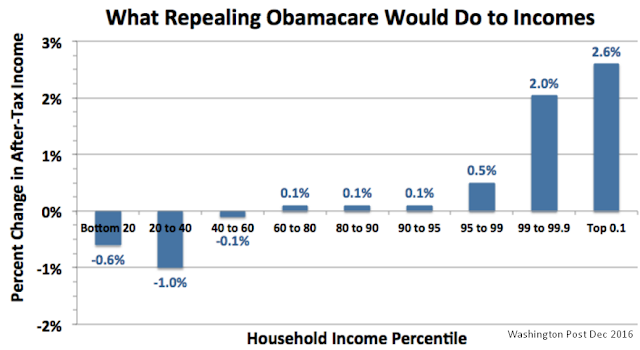 Although, as you can see below, it's even more lopsided than it sounds. The 44.8 percent of the total benefits that the 99 to 99.9 percent would get makes them seem like plebes compared to the 72.7 percent that the top 0.1 percent would. 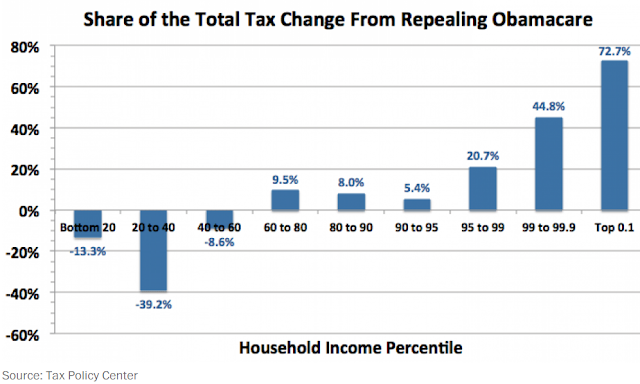 Still, Trump voters are convinced the poor are getting a free ride on the exchanges, despite rising premiums and deductibles. How do they pay for the increases if they're poor? Details, details. Check out the following mind bending lunacy that to at least one person, makes sense:

Tess Scotishtess: "The only people who like it are those who get subsidiaries making it free or almost free, because the rest of us are having to pay for them. Well enough, I dont want to pay for people who are too lazy to get up and get a job, and for welfare, you know what we should be drug testing 100% of all welfare recipients, just like when you go and get a job. It is time for all Americans to be heard, not just those who are poor, and willingly poor and maintained by the government."