WTF! No really, Trump isn't even president yet and his pick for national security adviser is looking like the most screwed up parental example ever:

The son of retired Lt. Gen. Michael Flynn, President-elect Donald Trump's pick for national security adviser, on Sunday appeared to spread a conspiracy theory that Hillary Clinton and her campaign chief ran a child-sex ring in a back room of a D.C. pizza shop.

Michael Flynn Jr. tweeted about the false story after an armed man entered Comet Ping Pong in Northwest D.C. and claimed to be investigating the story.

This is what passes for news now in Trump America. Looks like Lt. Gen. Flynn raised quite a kid there. A short explanation of "pizzagate:" 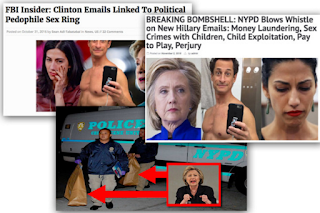 Edgar Maddison Welch of Salisbury, North Carolina, entered the bar and “pointed a firearm in the direction of the victim who is an employee of the restaurant.” The victim was able to get away and notify authorities. Welch allegedly proceeded to shoot the weapon inside the building. He was charged with assault with a dangerous weapon. Police said Welch admitted that “he came to self-investigate ‘Pizzagate’ (a fictitious online conspiracy theory).”

Flynn's son Michael Jr. linked his tweet to well known right wingnut Jack Posobiec, who added to the conspiracy theory with this lunacy:


Jack Posobiec, director of a group called Citizens4Trump ... described the incident on Twitter as a "false flag."

“Planted Comet Pizza Gunman will be used to push for censorship of independent news sources that are not corporate owned.”