I'm loving this, and Trump's not even president yet. Tough luck Indiana losers, your hard earned tax dollars are being piled high on a pallets and shipped off to Carrier...$700,000 a year for an undisclosed number of years until $7 million. Hard line Trump? 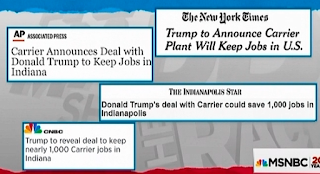 I don't normally watch "With all Due Respect" with Mark Halperin and John Heilemann, but they were fired up over the Trump/Pence giveaway. Heilemann wondered how Trump supporters would be happy with government stepping in, interfering and picking winners and losers. Guess it's okay if Trump does it?:

The Swamp is Overflowing: All this and more, even before Trump becomes president. As we're finding out, draining the swamp only applied to Democrats.  Trump's Wall Street millionaire buddies found work again, and downtrodden angry rural supporters can only watch the corporate class and investors walk away with all the winnings.