Republicans are the first to brag about their states low unemployment numbers only, but first to trash similar Democratic numbers by bringing up their sometimes lower worker participation rates. We're talking about people who are out of work and not looking for a job. Republicans like to suggest they're lazy and too dependent on overly generous safety nets.

The Great Recession changed a lot of things in corporate America. The biggest adjustment came when business decided to cut the number of full time workers so they could rely on cheaper parttime seasonal labor when demand increased. But that's just one factor.

Pay attention Republicans, because recent analysis explains why labor participation rates are lower, and have been trending that way for some time. Brookings Institute:

Some of the long-term decline in this country is traceable to declining employer demand for relatively unskilled workers engaged in physically demanding jobs. Part of it, too, is the result of shifts in family living arrangements and in women’s role in the labor market, both of which have reduced the central role of prime-age men as the principal breadwinner of a family. (Also) many Americans entering employment every month were jobless and did not report looking for work in the previous month.

Beside societal changes, certain occupations will also increase or decrease participation rate numbers as well. Which means it's hardly the bragging point some want you to believe it is, right Scott Walker?  The chart proves you can't "blame Obama," since the declining rate has been going on for the last 56 years. 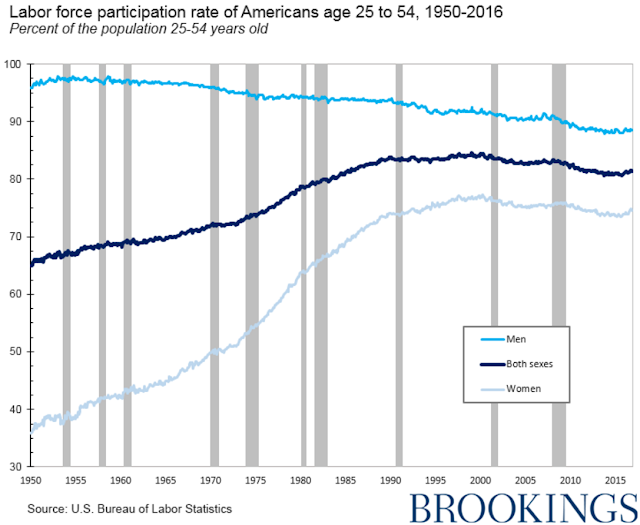