One of the biggest stories this year, the deletion of climate change at the DNR, will never get the attention it should from Wisconsin voters because of the holidays.

Scott Walker's attack on the environment was strategic, and is no different from any other Republicans; land and water is there to exploit and profit business; damage won't be seen for years, as planned, when it's too late. The changes shown below are breathtaking and inexcusable, no matter what side of the aisle, but blowback is unheard against Walker. Note: Trump has already tried to get the names of anyone working on climate change in the Obama administration so they could be weeded out:


Political Environment writer James Rowen reported on Monday that the Walker administration had advanced their war on science by scrubbing information about climate change from a Wisconsin Department of Natural Resources website that was dedicated to explaining how the agency would deal with a warming planet.

Deletions are shown with a black line through them, words which were untouched remain in normal print, and the highlighted wording becomes part of the new text sandwiched together into what appears on what is a heavily-censored page, but without any way for the reader to spot the edits and altered meaning. This is Orwellian and propagandistic: 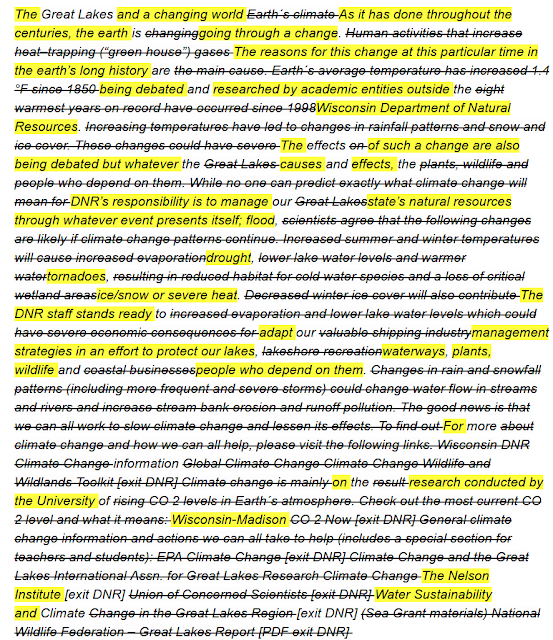