Walker's Transportation Nightmare passing to the next generation, and their kids.

The new transportation department report looking at the feasibility of adding tolls in Wisconsin, had the following factoid I couldn't get out of head yesterday. Let's be honest, Scott Walker is shifting the cost of highway infrastructure onto our kids and grand-kids. There's no other way to describe it: 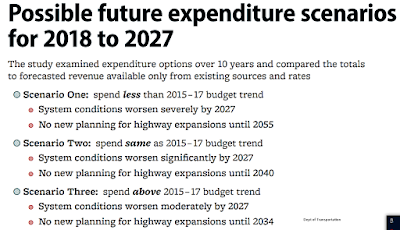 I know, it's breathtaking, and yet Walker and his drone like followers are unfazed.

I actually feel sorry for outgoing Republican DOT Sec. Mark Gottlieb, who sincerely made efforts to solve our transportation problems. Not even he could have predicted Walker's hard line...

WKOW: The study finds Gov. Scott Walker’s road-funding plan for the next two years, which holds the line on taxes and fees, puts Wisconsin roads on course to worsen “severely” over the next decade.

Findings from the study ... were released Wednesday. A day earlier, Transportation Secretary Mark Gottlieb, with little explanation, announced his resignation effective next month. Walker spokesman Tom Evenson said in emails to The Associated Press that Gottlieb decided to retire so he could spend more time with his family.

That explanation never did sound right me. But you could tell Gottlieb didn't want to fight Walker anymore. Listen to his most recent comment below. From WISC:


Gottlieb: "The department put this budget submittal based on a set of priorities the governor laid out. In order to do all those things that were in the report, there would have to be additional revenues, but that was not the scenario under which the department was operating."

In other words, don't blame me: 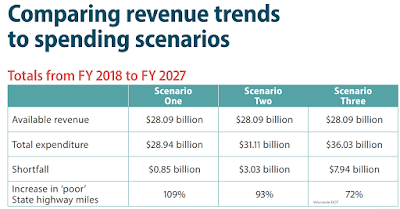 The report clearly lays out a path for tolls, which is something I've backed for years. Out of state traffic should add to our revenues. I though this was a little surprising, 940,000 Wisconsinites, including myself, bought an iPass (good anywhere in the country): 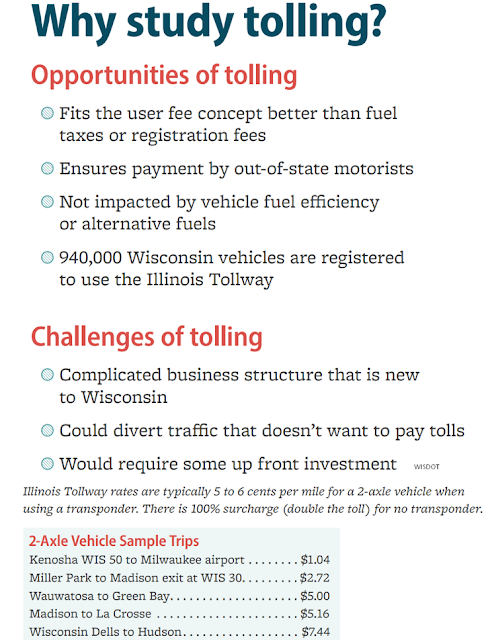 Of course paying tolls adds to the cost of travel, as you can see above. If you about double those amounts, you'd have high speed rail prices...not so horrible now is it?