The latest popular vote totals Monday (12-12-16), as reported by nonpartisan election analysis group The Cook Report, show Clinton garnering 65,746,544 votes compared to Trump’s 62,904,682, a difference of more than 2.8 million votes. In percentages, Clinton’s locked down a plurality of 48.2 percent of the vote and Trump 46.2 percent.

"...the result was nonetheless illegitimate in important ways; the victor was rejected by the public, and won the Electoral College only thanks to foreign intervention and grotesquely inappropriate, partisan behavior on the part of domestic law enforcement."

"Did the combination of Russian and F.B.I. intervention swing the election? Yes. Mrs. Clinton lost three states — Michigan, Wisconsin, and Pennsylvania — by less than a percentage point, and Florida by only slightly more," Krugman wrote.

"If she had won any three of those states, she would be president-elect. Is there any reasonable doubt that Putin/Comey made the difference?"

RECOUNT UPDATE: From the tweets pictured below, you would have thought we were all hoping for an election flip. Not true. Instead, the recount revealed millions didn't vote illegally!!! 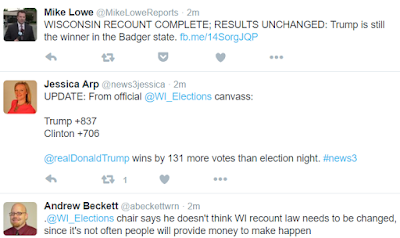