Reince: "A temporary ban on countries that harbor and train terrorists, until we get a better vetting system...that's really where 75% of the people are at...it is not a religious test...that's what I believe in, and that's what 80% of the American people believe in..."

...from Muslim countries? What this odd freak of nature came up with is classic Reince. Notice how Reince up the percentage of Americans who supposedly "agree" with the ban. Heck, I think I was just included. From the theater of the absurd...take it away Jake Tapper:


Trump recently indicated a change––only Muslims from terror states––but his team indicated there was never any pivot. Jake Tapper challenged him as that being just his “interpretation.”

Here are a few tweets: 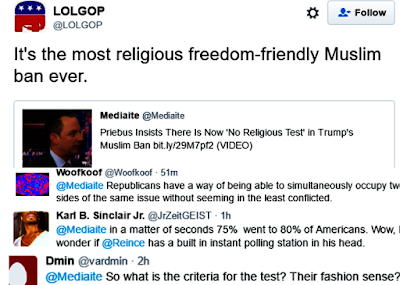