So the Trump staff are surfing racist, anti-Semite websites, anyone surprised? That's the shocking revelation that the Trump team can't bring themselves to admit. Why the hell not, it's not like Trump hasn't already cemented his creds as the racist and bigoted P.T. Barnum of Republican candidates for president.

Here's the offending Trump Tweet w/picture, with the "sheriffs" star on it, next to the original "8chan's/pol" message board picture for anti-Semites and white supremacists:

Mic discovered Sunday that Donald Trump's Twitter account wasn't the first place the meme appeared. The image was previously featured on 8chan's /pol/ — an Internet message board for the alt-right, a digital movement of neo-Nazis, anti-Semites and white supremacists newly emboldened by the success of Trump's rhetoric — as early as June 22, over a week before Trump's team tweeted it.

Of note is the file name of the photo, HillHistory.jpg, potentially a nod to the Neo-Nazi code for "HH," or "Heil Hitler," which the alt-right is fond of hiding in plain sight. The watermark on the lower-left corner of the image leads to a Twitter account that regularly tweets violent, racist memes commenting on the state of geopolitical politics.

For some odd reason, the unapologetic Trump changed the star to a circle: 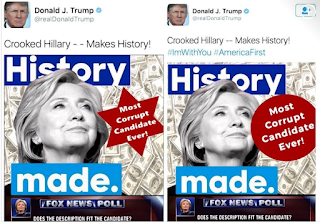 Trump quickly blamed Microsoft for the "sheriffs" star, but in fact, Microsoft's star is labeled "6-pointed star" with no reference to the sheriff's badge featuring rounded circles on the points. The Hill:

Donald Trump late Monday blasted “false attacks” by Hillary Clinton’s presidential campaign over his use of a six-pointed star in a tweet, saying Clinton is trying to divert attention away from “dishonest behavior.”

“These false attacks by Hillary Clinton trying to link the Star of David with a basic star, often used by sheriffs who deal with criminals and criminal behavior, showing an inscription that says ‘Crooked Hillary is the most corrupt candidate ever’ with anti-Semitism is ridiculous,” he said in a statement.

Trump's campaign said they didn't get the image from 8chan's/pol, but oddly forgot this one time to attribute the picture to a source, something they normally do to a fault. Just so you know, here are other images at 8chan's/pol: