The wise and wonderful governor of Wisconsin, Scott Walker, somehow misinterpreted the Constitution and pushed illegal attempts to suppress voting. What a thing to do in a representative democracy.

Even lapdog AG Brad Schimel, legal scholar and all around good Republican, thought he had this one in the bag. Again, just like last time, he was wrong. JS:


In a sweeping decision shaking up how the November election will be conducted, a federal judge on Friday struck down aspects of Wisconsin's voter ID law, limits on early voting and prohibitions on allowing people to vote early at multiple sites.

The judge also turned back other election laws Republicans have put in place in recent years. The order resets the rules for voting less than four months before the presidential election. A likely appeal could keep the laws in place.

A federal appeals court on Friday struck down a North Carolina voting law finding that Republican lawmakers intentionally discriminated against African-Americans when they passed it. (The) 4th Circuit U.S. Court of Appeals ruled that the measure's provisions "target African-Americans with almost surgical precision."

Most damming, The appeals court — citing a lower court’s findings — noted that North Carolina legislators not only sought data breaking down voting practices by race, but then crated the law’s new provisions to single out practices disproportionately popular among African Americans, like early voting and provisional ballots.

... addresses a broader set of election laws that have been modified in recent years, including ones limiting early voting and requiring voters to establish residency 28 days before voting. Both those measures are unconstitutional, U.S. District Judge James Peterson ruled in a 119-page ruling Friday

Aides to Schimel defended the laws, arguing lawmakers have broad leeway to set voting rules as they see fit.

The voter fraud house of cards keep trampling over our right to vote:

The ruling comes a week after another federal judge ruled voters in November could cast ballots without showing ID if they submitted statements at polling places saying they could not easily get a state-issued ID card. Attorney General Brad Schimel has already appealed that ruling. 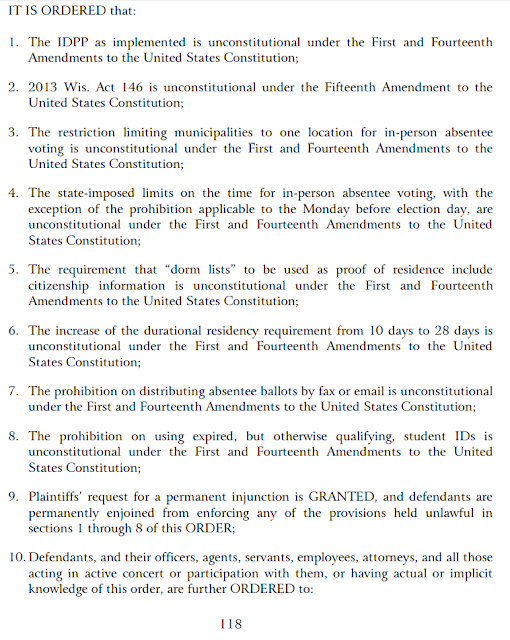 As sensible as Judge Peterson's findings were, states rights Republican Jim Steinke would have none of it, noting his party can do anything it wants once given the power:

Assembly Majority Leader Jim Steineke (R-Kaukauna) dismissed the ruling, saying that Peterson overstepped his authority. "Another in a long line of judicial overreaches that usurp states' rights. One more example of why (the U.S. Supreme Court) is critical," Steineke tweeted.