Janesville buckles under to Big Business, now a Million Dollars in the Hole.

Thanks to lower business property tax assessments in Janesville, the city is now $1 million short.

WISC has yet to post the story beyond the story below, but you couldn't find a better example of big business tax cuts that are eating it's host city alive:

Rocknetroots has been on top of this and blogged the following background story from Janesville's freeloading big business conservatives. Guess what, there is a cause and effect: 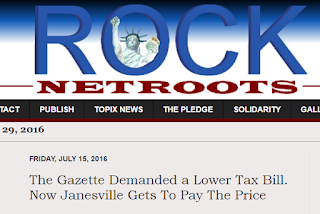 Not too long ago, the Janesville Gazette posted anexclusive article about how some Janesville area big box retailers and other businesses are putting the squeeze on Janesville taxpayers by using a "dark store" argument to win substantially lower property tax bills. Some received settlements while others won lower property assessed values, refunds or both. the Gazette's parent label, Bliss Communications, hired a tax lawyer to, as lawyers are described in their editorial about the retailers, to "prey on the city" by filing an objection to their own property tax ... (resulting in) a $30,000 lower annual tax bill for the media company.

Labels: Janesville, Supply Side Economics
Email ThisBlogThis!Share to TwitterShare to FacebookShare to Pinterest