You know, some things get worse and worse, the more you think about them. Like Dumb Ron Johnson's attempt to allow voucher schools to discriminate against disabled kids...that get taxpayer money.

It sounds wrong, yes, but but not to Ron Johnson. His reaction to the Justice Department's attempt to protect these kids was to propose a law that would block any further investigations from ever happening again. Something he's calling "overreach." I know, this from the party of right wing overreach. Here's the shortened version of the story from JS: 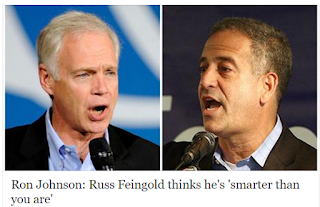 U.S. Sen. Ron Johnson has proposed an amendment to an appropriations bill that would limit the Justice Department's ability to enforce some provisions of the Americans with Disabilities Act at private schools that receive taxpayer funding.

The Republican senator had been a critic of a long-running U.S. Department of Justice investigation into allegations that the state's Milwaukee Parental Choice voucher program discriminated against students with disabilities — a probe that ended late last year with no significant findings of wrongdoing.


1. Johnson opposes investigations that don't turn up "significant" findings. This Republican head scratcher is a major part of the right wing authoritarian movement. It pretends that only the most obvious and knowable crimes can be investigated, like Benghazi and Hillary's emails, not "witch hunts" like the Walker John Doe investigations or the Bush administrations deceptions to invade Iraq. There are conservative ideals, and then there are politically motivated liberal witch hunts.


Johnson's staff said the amendment is intended to deter the kind of "government overreach" they said characterized the Wisconsin probe and to limit politically motivated attacks on voucher schools.

2. Johnson could have easily clarified the Justice Departments responsibility to carry out such investigations, or expand them, instead of calling it a politically motivated attack on voucher schools and block parental justice.


"It would keep the DOJ from expanding its jurisdiction in ways the law does not permit," said Johnson aide Patrick McIlheran.

3. Johnson would make it possible to pick and choose who is and isn't protected:


Kit Kerschensteiner, managing attorney at Disability Rights Wisconsin. "You can't single out a group covered by an anti-discrimination law and tell others that it's OK to discriminate against them."

4. Dumb Ron Johnson's word game on what is a "public school" and a private one opens the door for publically funding other private businesses seeking to plunder the deep pockets of the taxpayer.


The amendment would bar federal funds made available to enforce Title II (which) prohibits state and local governments from discriminating against people with disabilities and to make reasonable accommodations for those disabilities where necessary. Johnson's staff said the Department of Education and the courts have ruled that voucher schools are not public schools just because they receive government funds.

5. Taking the power away from motivated angry parents seeking justice, and putting it in the lap of hopefully Republican politicians who don't give a rats ass about disabled children:


The amendment would still allow DOJ to investigate cases in which the state, and not parents, placed students in a school.

Get that? That's the key: "...and not parents, placed students in a school." No accountability to parents? So voucher schools are no longer accountable to taxpaying parents who are funding those schools? It's a profiteers dream come true...anything goes.

Some ugly stuff isn't it. Speaking from a point of sanity, and not political opportunism as Johnson would have people believe:


"It's shameful that he's trying to sneak in a measure to allow discrimination against children with disabilities instead of listening to the middle class and working families of Wisconsin who want their kids treated with the respect and dignity they deserve."