Remember when we mindlessly protected the Transportation Fund from being Raided?

Thank god we constitutionally protected the state’s transportation fund from being raided and used somewhere else in the budget!!! What an amazingly irrelevant exercise, and remember, that was a big Republican accomplishment. 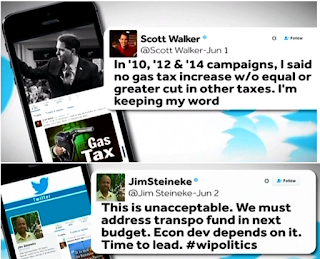 I only found out about the story below from a Rep. Robin Vos tweet…that’s right, not from a
Democratic legislator’s tweet. Similarly, I was surprised to find out that interstate construction between Madison and Janesville had been delayed a whole two years thanks to Scott Walker. That just changed when new federal funding was provided.

Scott Walker said he would not support any gas tax increase or hike in registration fees.

History Repeating Itself: Are we about see a Republican led veto override? This is the same nifty trick Walker pulled off as county executive, holding true to his promise not raise taxes, but letting the county board override his veto. He was happy keeping his Grover Norquist pledge, and the county was happy to serve the people and not let everything go to hell.

From the La Crosse Tribune:

With a recent American Society of Civil Engineers study ranking Wisconsin 48th among the states in terms of road condition … groups representing the state’s towns, villages, cities, counties and the business community are pressing Gov. Scott Walker and state legislators to provide more state transportation funding for maintenance and improvement of county and municipal roads and bridges.

Basically, an increased emphasis on bonding (borrowing) for road projects means the cost of interest is leaving less for both state and local road projects. Remarkably, the percentage of the state transportation budget going to debt service more than tripled in that same span. In 2000, debt service accounted for 4.4 percent. By 2010 that had risen to 7.2 percent and by 2013 it had nearly doubled again to 13.8 percent.

Looking at combined gas taxes and registration fees, Wisconsin is well below neighboring states ... Gas taxes and registration fees cost the average Wisconsin driver $23 per month, the statement said, while it’s $42 in Minnesota, $41 in Iowa and $34 in Michigan. Walker had proposed borrowing $1.3 billion over two years for road spending, but the Legislature pared that back to $850 million.

Walker’s column also made plain; “During the 2014 campaign, I made it clear I would not support a gas tax increase or a vehicle registration increase without a corresponding decrease in other state taxes I will not raise the overall tax burden on the hardworking people of Wisconsin.”

Assembly Speaker Robin Vos, R-Rochester, recently told Wisconsin Public Television “I just disagree fundamentally with Gov. Walker’s assumption that we can kick the can down the road, push decisions onto a future legislature, which will end up being more expensive and potentially not in the interest of taxpayers.”