No really, Republicans are definitely trying to suppress voting.

Here's the amazing facts behind the decision:


A federal appeals court on Friday struck down a North Carolina voting law finding that Republican lawmakers intentionally discriminated against African-Americans when they passed it. (The) 4th Circuit U.S. Court of Appeals ruled that the measure's provisions "target African-Americans with almost surgical precision."

Most damming, The appeals court — citing a lower court’s findings — noted that North Carolina legislators not only sought data breaking down voting practices by race, but then crated the law’s new provisions to single out practices disproportionately popular among African Americans, like early voting and provisional ballots.

Race and Politics: Know now that they just aren't lying, they're also rigging elections because they can't win with their dystopian policies: 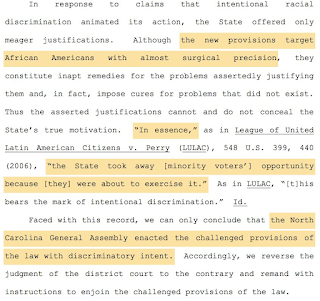 The state's history of racial discrimination in voting, the appeals court said, "highlight[s] the manner in which race and party are inexorably linked in North Carolina. This fact constitutes a critical — perhaps the most critical — piece of historical evidence here. The district court failed to recognize this linkage, leading it to accept "politics as usual; as a justification for many of the changes in [the voting law]. But that cannot be accepted where politics as usual translates into race-based discrimination."

The ruling is just the latest court win for voting rights advocates. A different federal appeals court ruled this month that Texas's voter ID law is racially discriminatory and must be softened. And a district court softened Wisconsin's ID law, too, though that decision is being appealed.