Republicans like Scott Walker seem to think they've successfully sold the public on supposed "unbiased" activist supreme court justices who have been members of longstanding right wing organizations, while vilifying everyone else as "liberal."

He really does think we're all that stupid, like his supporters. But seriously... 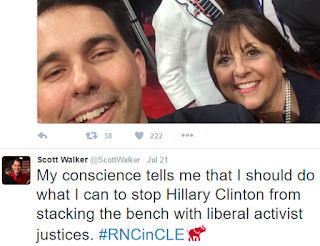 He has the balls to make that comment after again, stacking the conservative state supreme court with another lackey:

Conservative justices aren't biased, even the politically active ones like Daniel Kelly? But a simple Google search will tell you something different:

This is what passes for a fair conservative, activist, legislator justice, who'll rubber stamp right wing politics into constitutional law:

Kelly has been closely involved with conservative legal groups. The president of the Milwaukee chapter of the Federalist Society, he also sits on an advisory panel to the Wisconsin Institute for Law & Liberty… Kelly was an adviser to state Supreme Court Justice Rebecca Bradley's campaign (she was also a Federalist Society member) this year and served as an attorney on Prosser's campaign during a recount after he narrowly won re-election in 2011.

He also was on the legal team that defended legislative and congressional maps that Republican lawmakers redrew in 2011. In that litigation, a panel of federal judges made changes to the districts for two Assembly districts on Milwaukee's south side after it found those maps violated the voting rights of Latinos. The other maps—which greatly favor Republicans—were left in place.

So failure to redraw districts fairly didn't disqualify this guy? He succeeded just enough to win the heart of Walker.