I thought this detailed look at the right wing hypocrisy and intended politicization of our nations courts touched on all the right points when it came to the phony outrage over Justice Ginsburg's Trump comments. This piggybacks off my first piece.  Huffington Post: 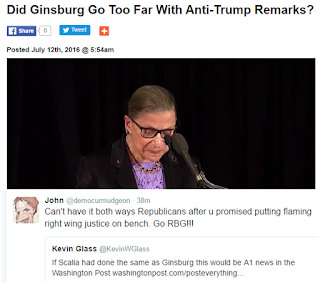 While Justice Ruth Bader Ginsburg apologized for her remarks on Donald Trump last week, politicians and the media who did backflips to criticize her are rewriting history. Strong, opinionated women, like “The Notorious RBG,” are always criticized. Her comments deserve a deeper analysis beyond subjective punditry or sanctimonious Tweets.

It is worth watching Lawrence O’Donnell’s piece taking the issue out of the headlines and putting it in context. There has been clear precedent for Supreme Court involvement in elections prior to Justice Ginsburg’s opining.

The first justice of the Supreme Court, John Jay, ran for Governor of New York twice during his service. Three other Supreme Court justices ran for presidential nominations while serving and continued to serve after they lost their campaigns.

As O’Donnell points out, a surprisingly erroneous Washington Post piece said, “Supreme Court experts I’ve spoken to were unaware of any justices getting so directly and vocally involved — or involved at all, really — in a presidential campaign.”

In 2000, Justice Antonin Scalia was the justice who stopped the recount in Florida with an unprecedented injunction favoring George Bush. He then was one of the five Republicans on the Court who overruled the Florida Supreme Court and installed George Bush in the White House.

The vast majority of the 5-4 decisions since the Justice Rehnquist era, when Republicans had the Court majority, have not deviated from GOP orthodoxy and favoritism. For instance, the Citizens United decision overwhelmingly results in more financial support on behalf of Republican candidates.

In 2004, it was public knowledge that Justice Scalia had a friendly and personal relationship with Dick Cheney, and yet would not recuse himself on a case involving the then-vice president. “In a 21-page memorandum filled with scorn and with lessons in the ways of Washington, Justice Scalia wrote that if people assumed a duck hunting trip would be enough to swing his vote, ‘the nation is in deeper trouble than I had imagined,’”(New York Times).

The media states again and again that the Supreme Court stays out of politics, but actions speak louder than words. Justice Samuel Alito has not attended a State of the Union since President Obama critiqued the Citizens United decision in 2010.

Gary Legum writing for Salon says, "For us to continue pretending that the third co-equal branch of our government can somehow remain immune to the highly polarized atmosphere of the other two is to infantilize the American public.

If we are comfortable enough labeling our Supreme Court justices as either “liberal” or “conservative”... If we are so comfortable with assuming that an established and accomplished judge such as Merrick Garland, for instance, with a long resume of impartiality on the bench is nothing more than a political football to be tossed around by Republicans... If we are truly happy to accept these labels and partisan plays with the Supreme Court, is it actually surprising or so wrong that a distinguished, 23-year-serving justice should hold a personal opinion?

The actions of Justice Scalia are lauded and Justice Ginsburg is immediately criticized. There is one big difference — Ginsburg is a woman.