Fascism is coming to America, and the news media won't even bring it up. But there's a real possibility fearful angry voters will choose a fascist, blunt, tell-it-like-it-is "leader" to make our country great again.

Eye Rolling Declarations of Fascism: Just this morning I heard radio host Mich Henck downplay Trump's obvious fascism. Henck thought it was over the top to supposedly compare Trump to Hitler and Mussolini. But Henck could have just as easily, and more realistically, used the plain old definition of fascism as the template, pushing aside the historical references.

As bad as Trump is, Scott Walker could have been much worse. During his presidential bid, he essentially promised to dissolve the federal government and declare independence to the states. With Homeland Security and the military under his control, you can bet "law and order" would still be maintained by Walker, a rightwing authoritarian father figure. Walker tipped his hand early on as governor. He began using the names of his opponents from his recall petitions as a political black list to attack and quash them.

The New National Black List:  Now it appears Wikileaks has posted the Democratic Party's donors names and addresses. With the possibility of one party rule under Trump, that sets up a number of scary possibilities. ABC:

A review of the documents by ABC News found the material includes detailed personal information about many of the party’s wealthy supporters. One file, titled “Big Spreadsheet of All Things,” appears to list every single donation made to the party...


Which prompted this reaction from Clinton: 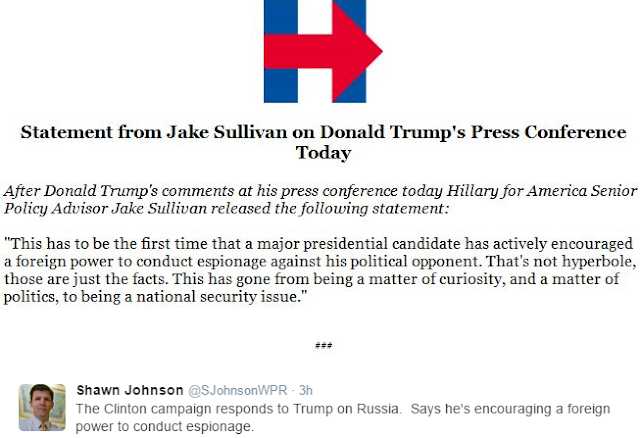 The conservative columnist at the Weekly Standard and Fox News, Stephen Hayes, tweeted the following: 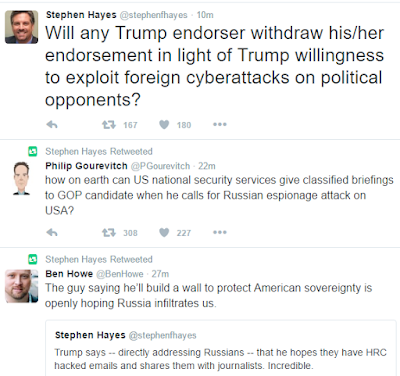 This is hhhuggge. While it's obvious money has to purged from influencing our political system once and for all, something our activist conservative supreme court justices just don't seem to get, we're still left in this dangerous place. As pointed out by Wired.com:


WikiLeaks Has Officially Lost the Moral High Ground: WHAT THE HECK is going on at WikiLeaks? In the last two weeks, the font of digital secrets has doxed millions of Turkish women, leaked Democratic National Committee emails that made Hillary Clinton’s presidential campaign look bad but also suggested the site was colluding with the Russian government, and fired off some seriously anti-Semitic tweets.

Remember the near Turkish coup?


(Release of) the so-called Erdogan Emails was particularly egregious. The organization said that the infodump would expose the machinations of Turkish president Recep Tayyip Erdogan immediately after the attempted coup against him, but instead turned out to be mostly correspondence and personal information from everyday Turkish citizens. Worse, it included the home addresses, phone numbers, party affiliations, and political activity levels of millions of female Turkish voters. That’s irresponsible any time, and disastrous in the week of a coup.