So, it was plagiarized.

Melania Trump may not be running for office, but her role in the presidential campaign is important, especially to Donald Trump. What his campaign does is therefore important and a reflection of what a Trump presidency might be like in office. Lying and stealing just got a pass by Republican voters.

Plagiarism is a big deal to the right wing, who have made it their business to remind every Democrat of the time they lifted comments without attribution. Scott Walker trashed his Democratic opponent Mary Burke for supposed plagiarism when the person writing her jobs plan copied his own previous work. 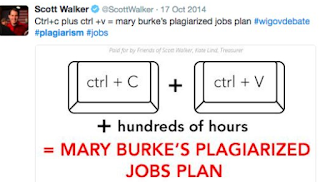 Walker: “She’s not the candidate, so I’ll give her deference and let them explain staff or otherwise. Donald Trump is the candidate." 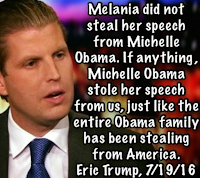 Stolen Passages: Imagine Melania giving attribution to Michelle Obama at the convention. Not happening. Melania's speech turned up 23 matches according to "TurnitIn." Only 16 are needed to create the likelihood that a match is coincidental is less than 1 in a trillion. Yikes.

But now we know Michelle Obama was a major influence to Melania, word for word. Politico:


The Trump campaign emails: "Meredith McIver, an in-house staff writer from the Trump Organization, has released a statement ... McIver's statement, which says the Trump family "rejected" her offer (to resign) ...

The statement reads: "My name is Meredith McIver and I’m an in-house staff writer ... "In working with Melania Trump on her recent First Lady speech, we discussed many people who inspired her ... A person she has always liked is Michelle Obama. "Over the phone, she read me some passages from Mrs. Obama's speech as examples. I wrote them down and later included some of the phrasing in the draft that ultimately became the final speech. I did not check Mrs. Obama's speeches. That was my mistake, and I feel terrible for the chaos I have caused Melania and the Trumps, as well as to Mrs. Obama. No harm was meant. Mr. Trump told me that people make innocent mistakes and that we learn and grow from these experiences.

But the Trump campaign's cover up just made it worse, showing voters how a little rephrasing can avoid ever taking any responsibility.

“As far as we’re concerned, there are similar words that were used. But the feelings of those words and the commonality of those words do not create a situation where we feel we have to agree [that plagiarism occurred]. You want to have that opinion, fine.”