Paul Ryan to someday repeal Nations Legal System? It's not meeting up to Republicans Expected Standards!!!

Because we've seen it so many times before, I'm surprised not much is being made of the Republican ploy to first politicize, then delegitimize our legal system. Law decided in the court of public opinion will someday replace big bad government agencies like the FBI. Everything must strictly conform to the party's predetermined outcome, like perp walking Hillary Clinton.

So, Ryan is calling into question the FBI's conclusion that didn't meet the Republican authority's call to charge Hillary Clinton, just before the presidential election. Well that's inconvenient. It just proves government is bad, see...

"But based upon the director's own statement, it appears damage is being done to the rule of law," Ryan said. He added that declining to prosecute Clinton for her handling of classified information "will set a terrible precedent."

I'm pretty sure our legal system would be quite different under our right wing authoritarian Republicans, as they cleanse the nations legal system of interpretations that don't meet party objectives.

You might remember when Scott Walker got a pass from John Doe prosecutors who said the exact same thing about Walker, who appeared to have known about the illegal and secret wireless router in his office. There wasn't enough strong evidence to show it was intentional to get a conviction...like Clinton. That didn't stop Walker from doing away with John Doe's completely when it comes to politicians.


Here's FBI director James Comey, Republican, defending himself and his bad government agency from political buffoons like Ryan and Walker:

Although there is evidence of potential violations of the statutes regarding the handling of classified information, our judgment is that no reasonable prosecutor would bring such a case."

This kind of explains it all: 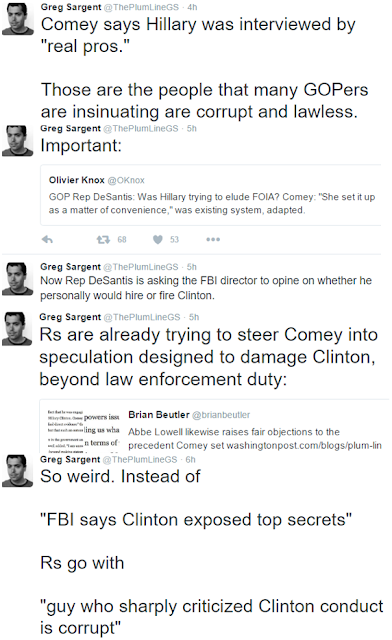