The con goes something like this; while Republicans stamp their feet and whine about low wages hurting the struggling "real American" middle class, they're doing everything they can to make the problem worse, to advance the politics of resentment and to play to their voters darkest fears.

For seven years, it has remained at $7.25. Given the breakneck pace of state and local action—26 states, the District of Columbia, and at least 25 cities have ushered in higher minimum wages in the past two-and-a-half years—it’s easy to let the federal minimum wage fade in the nation’s rearview mirror ... But in 21 states, low-wage workers are still stuck at $7.25 per hour. That means 57 million workers—nearly 40 percent of our workforce—work in a state where the minimum wage is well beneath the federal poverty level for a family of two. What’s worse, at least 14 states have gone so far as to pass preemptive legislation that prohibits local areas from enacting their own minimum wage policies.

And every year that minimum wage gets lower, stirring up even more anger: 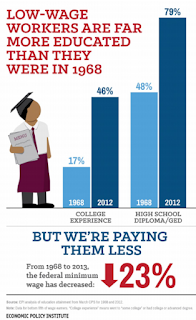 In fact, a minimum wage earner in a $7.25 state who is working full-time, year-round would have to clock an additional 244 hours each year just to take home the same annual pay she did in a single year in 2009, after adjusting for inflation. Put another way, she’d need an extra 31 working days—more than six weeks—just to maintain her earnings from seven years ago.

So, until we master the magic of time dilation, every year that Congress fails to raise the minimum wage will effectively mean another pay cut for workers in these states—and with it, a greater struggle to make ends meet.

In Scott Walker's Wisconsin, local communities are banned from creating their own minimum wage, setting the state minimum wage to the federal limit. If the Republican Party had its way, there wouldn't be a minimum at all. Just to make his point, Walker made two more changes:


Gov. Scott Walker signed the new state budget into law on Sunday (July 2015) with a last-minute change that strips the words “living wage” from state laws and replaces it with “minimum wage.”

The new law eliminates the ability of low-wage workers to appeal for a living wage. Previously, Wisconsin law stated that employee pay “shall be not less than a living wage,” defined as “adequate to permit any employee to maintain herself or himself in minimum comfort, decency, physical and moral well-being.”

100 workers, most earning just above the minimum wage (challenged that), contending their pay wasn’t a living wage. The state denied their claim, declaring “there is no reasonable cause to believe that the wages paid to the complainants are not a living wage.” The workers later filed a lawsuit against the state...


Walker also decided workers don’t need weekends off. According to the Milwaukee Journal Sentinel, the budget Walker signed “would allow factory and retail employees to work seven days without a day off, as long as they said in writing that they were doing so voluntarily.” The old law required employers to give workers at least one day off for every seven days of work. 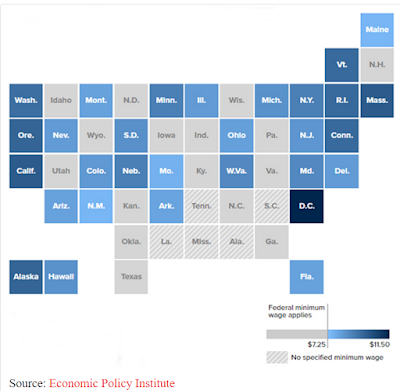