The moment Republicans promised, as a party, to nominate a conservative justice to the Supreme Court was the day they gave up the right to complain about liberal judges and any suggested expectation of impartiality.

Republicans individually have demanded activist judges and justices before, even allowing judge shopping here in Wisconsin, but this latest example of faux outrage takes the cake.

The Republican point of no return came when they blocked Obama's nominee to replace Justice Scalia, hoping a Republican president would insert an activist believer in "originalism," a wildly conservative concept pushed by all the diehard Birch Society loyalists now comfortably at home in the Federalist Society. 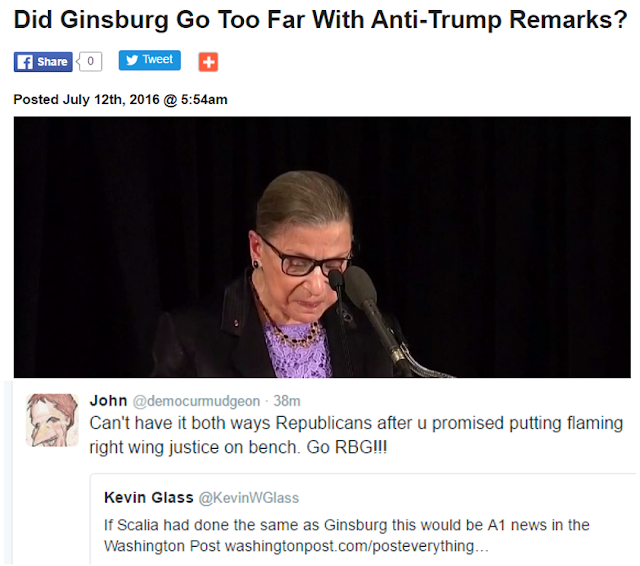 
The Supreme Court justice told the AP she couldn't imagine what the country would be like under Trump and joked to the New York Times about moving to New Zealand ... could end up forcing her to recuse herself from future cases involving a President Trump—or election cases like a potential Clinton vs. Trump recount.

Conservative justices and judges have already argued that comments, personal appearances at groups appearing before them and monied special interests backing elections and appointments is no reason for recusal...so what's their beef?

As for Trump's reaction? Wouldn't it be nice if she quit?


"It only energizes my base even more. And I would hope that she would get off the court as soon as possible.”

Here are more links provided by a comment to a NY Times editorial bashing Ginsburg:


Where was their outrage over the MANY, MANY partisan events and partisan tropes attended by and headlined by conservative justices Scalia, Thomas, Alito?  http://thinkprogress.org/politics/2011/01/26/14065...
http://thinkprogress.org/politics/2011/01/20/13986...
http://www.cnn.com/2011/POLITICS/01/20/scotus.conf...
All the raging of the right wing noise machine don't set aside the FACT that the court is as politically divided as the rest of the country and that the downfall BEGAN with the likes of Scalia and Thomas.
http://www.commoncause.org/press/press-releases/co...