More dangerous than the outright plagiarism running rampant in the Republican Party, is the media's promise to make this whole story go away. It's like they can't wait to move on to something else. Reporter after reporter and radio news reports are repeatedly saying in their coverage that this will go away and won't matter at all. Oh, okay. Amazing.

Here's the offending speech by Melania Trump, a speech she said before the convention she wrote herself:

The irony is that Trump would just happen to plagiarize elements of Michelle Obama's speech, one of the Republican Party's most despised first ladies, next to Hillary of course.

I wonder what Scott Walker would say about this top-of-the-ticket recklessness, since he made such a big thing about plagiarism against his Democratic opponent Mary Burke.

It's clear from my conservative friend in Milwaukee that this won't change his mind about who he'll vote for, and even he thinks this is a disaster.

We should have seen this coming after Trump ripped off Walker's campaign symbol:

OH NO!!! These tweets have now surfaced...assuming they're real, Trump's got a problem: 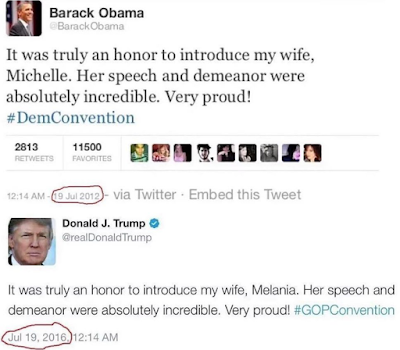