Walker's dystopian vision will push the threat of economic isolation, military feet on the ground and "steal in the face of our enemies."

I thought Scott Walker was an egomaniacal sociopathic rightwing authoritarian before it was okay to say such a thing about our likable 3 time winning governor.

Walker's latest "steal in the face of our enemies" threat to China should end all speculation about his readiness to be president. Talk about knee-jerk reaction: 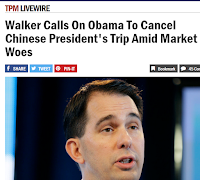 “Americans are struggling to cope with the fall in today's markets driven in part by China's slowing economy and the fact that they actively manipulate their economy ... President Obama needs to cancel the state visit ... we need to see some backbone from President Obama on U.S.-China relations."

You could even call this Walker's "McCain moment. Remember?


John McCain announced that he would suspend his campaign and asked that Friday's debate be postponed. Why? Because of the "historic crisis in our financial system."

Walker's absurd "backseat" order to the current president was remarkably similar to an order he gave to his predecessor Democratic Gov. Jim Doyle, when he asked him to stop hammering out a deal with the states public unions before leaving office.

Bottom line: Believe it or not, Walker wants to penalize China for trying to reform their economic system, a goal of the U.S. for years.

Here's a compilation of clips showing the reality based Obama assessment, Trump mouthing off, and then Walker taking his cue...

The national media noticed too, big time, and it started innocently enough...: 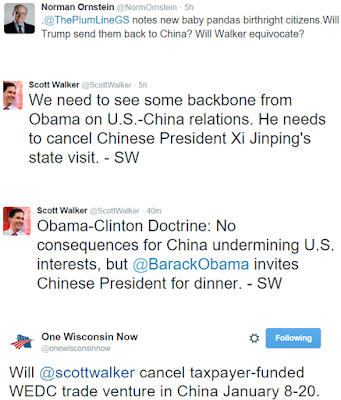 One Wisconsin Now made an important point. In fact, if anybody needs a backbone it's Scott Walker, Walker was once drooling over the possibility of trade with China. A quick search through the Journal Sentinel archives turned up this list: 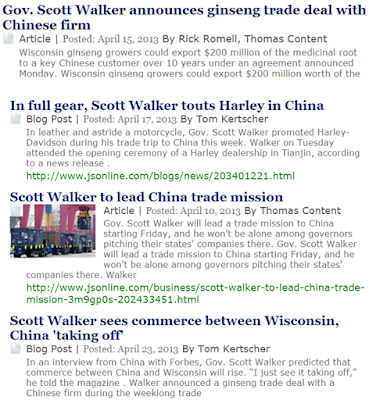 Here's one of the reasons for China market instability, which had more to do with reform and a much needed market correction. You'd think Walker would have taken a little time to look it up himself:

An editorial openly called out people questioning China's attempt at economic reform (including weeding out corruption) known as "The New Normal." That was published across multiple publications, including the People's Daily. The piece was signed by "Guoping," a pen name the government uses when it wants to get its point across.

"The New Normal" is the government's name for the inevitable slowdown that has come from China's transition from an economy based on investment to one based on consumption. It's a long-term reform play and, to many, one that's long overdue. But it comes with major pain. Xi had prepped his people for lower growth, but no one expected the slowdown would come so hard and fast. This is a test of the leadership's ability to execute its mission.