Walker tames weak state Republican leaders, who were afraid of Big Bold Walker Agenda? Not what they remember...

Our brave unintimidated Governor Scott Walker has just bitten off more than he can chew. It seems that when you belittle and cast your fellow Republicans in the legislature as timid and weak, you're going to get some blowback. Maybe even come across as a blowhard liar of sorts. jsonline: 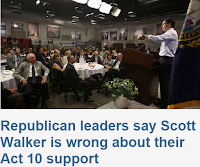 Some Republican leaders in Wisconsin are disputing Gov. Scott Walker's latest account of how he took on the GOP establishment during his battle with public employee unions. Walker in recent days has been stressing the resistance he mt not just from ... Republicans.


Walker: "Sometimes people (think) I just took on the unions or the other party. We did. But before all that, we had to take on our own party's establishment. There were a lot of people in my party, particularly in the legislative branch, who said, 'You know it's nice to be in the majority, that means we've got a bigger office and more staff and nice titles but I don't know that we really want to do all that much more.' They said, 'It's kind of safe here, if we have to push some of the big, bold reforms you're talking about, there might be some push-back. And some of us in safe seats might actually have some challenges.' You know what? We said, 'Never mind. We got elected for a reason. We didn't get elected for a title .... We got elected to do something.'"

He is selling himself as a politician who will fight for voters and who is willing to embrace "big, bold" ideas.

Walker is so desperate to get that Iowa vote he'll even trash his lackey, one party legislature that pretty much does everything he wants:

But Assembly Speaker Robin Vos (R-Rochester) said Republicans in that house never balked over the controversial proposal to all but end collective bargaining for most of the state's public workers, known as Act 10. "That was not my recollection. I wasn't in every meeting but on the Assembly side, I never met anybody (in leadership) who wasn't on board from day one." Vos said he did not recall the kinds of push-back that Walker is now describing. He added that he never heard any GOP leaders worry about losing perks, such as their title or office. "It seemed to me the whole discussion was about how we were going to get it done. I have always felt we were a team."

Assembly Majority Leader Jim Steineke (R-Kaukauna) made similar comments on Twitter Friday morning. "I was new at the time, but timid is not a description that fit our caucus. Resolute and united is," he tweeted.

Former Sen. Dale Schultz, who was the only Republican senator to vote against Act. 10, said he remembers Walker visiting the Senate GOP caucus. "There was a lot of concern there, but the leadership had already bought into doing this. We'd already been told this was going to happen." 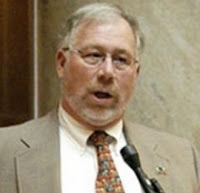 The comments struck a nerve with Sen. Luther Olsen, R-Ripon.


"The thing is, we were all the guys facing the crowds every day coming in and out of our offices. We didn't have the police protection," he said. "Taking on your friends ... and saying you were the tough guy? Thanks a lot, buddy."