Wind Energy, both power and jobs, is happening despite what backward Wisconsin Republicans and WMC tell us.

I made an amazing discovery the other day while paging through a really old alternative Milwaukee newspaper, the American Bugle. The 1975 weekly featured an article about wind energy, pictured below. Imagine where we'd be today if big energy didn't keep wind from becoming a serious player. Of course they're still at it, with doom and gloom warnings about killing business and rising customer utility bills, never mind their continual requests at the PSC for hikes using cheap coal. So what's that all about?

That myth gets trashed in the current article at the bottom that proves wind energy isn't just affordable now, but a job creator to boot. So let's take a look at what the "21st Century" will like. Click on the picture here to enlarge: 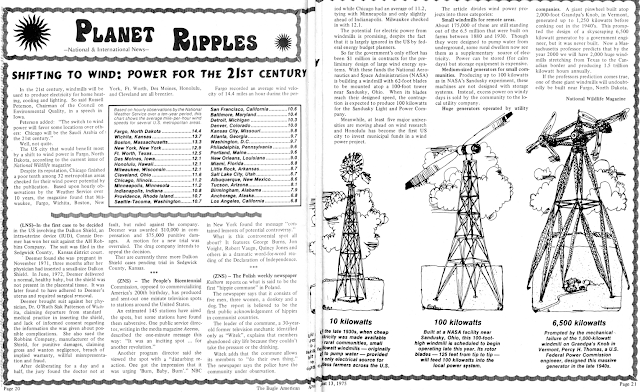 Now here's the latest good news that will once and for all end premature deaths due to fossil fuel pollution:

WaPo: Two new reports published Monday by the Department of Energy find that one key renewable sector — wind — including the 2014 Wind Technologies Market Report, published by Lawrence Berkeley National Laboratory — suggest that wind is being installed at a rapid rate, that its costs are plummeting, that its technologies are advancing, and that it is creating 73,000 jobs to boot.

Sad to say, Wisconsin is not one of those job creating states. Easing our energy dependence on coal isn't even a thought, and neither is being more self sufficient producing our own energy:


Wind energy in the U.S. is now providing roughly 5 percent of total U.S. electricity demand (66 gigawatts). And 13 more gigawatts are now “in the construction phase” and set to come online by 2016.

According to the Energy Department’s Office of Energy Efficiency and Renewable Energy, “It really dispels some of the past myths that you cannot have significant amounts of wind energy in the system — a variable source in the system — without really affecting the overall efficiency.”

And most striking, it found that the wholesale cost of wind energy — bought under a “power purchasing agreement,” or PPA, in which a utility or company buys power from a wind farm under a long term contract — is now … cheaper than the average price of wholesale electricity in many parts of the country,” says Ryan Wiser of Lawrence Berkeley National Laboratory, a lead author of the new report. Granted, it’s important to note that costs would not be so low without the wind production tax credit. Still, it’s impressive. With the wind production tax credit expired, beyond 2016 there may be less wind growth.

Distributed wind, like distributed solar, refers to wind energy — typically just one or two turbines — installed by private individuals or companies to allow them to generate a portion of the electricity they need onsite, rather than having to buy it from a utility company. Wind isn’t the only renewable sector booming — at least for rate of growth lately, solar greatly surpasses it, with the electricity generated from solar in the U.S. doubling between 2013 and 2014. However, thus far, wind contributes a larger percentage of our total electricity than does solar.