Walker never has to worry about health care or term limits.

Scott Walker has raised a family on the taxpayer dime. Those same taxpayers also never had a problem paying for Walker's free health care while they had to struggle with rising premiums, larger contributions at work, or preexisting conditions.

And while Walker talked about backing term limits, he was always above all that. jsonline:


Scott Walker pushes term limits, but broke pledge as county exec: At a town-hall meeting in New Hampshire last week, Gov. Scott Walkercalled for 12-year term limits for the U.S. House, Senate and federal judiciary. And he took credit for limiting his own terms during his 22-year political career.

"I've self-imposed them myself. I've never been in an elected position more than 10 years," said Walker … But in 2008, Walker failed to keep a term-limit pledge of his own when he sought a second full term as county executive.

Of course as a career politician who’s always running for something, he made a convincing case for giving the boot to lingering politicians: 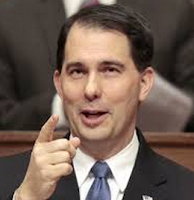 Ever get the idea Walker has his own designs on changing the Constitution, "dropping the bomb" on that someday:

He told his audience he supported federal term limits even though it would require amending the U.S. Constitution.

What would a 12 year term limit mean to Rep. James Sensenbrenner’s 37 years career, or Paul Ryan’s 17. It’d be kind of nice not having them around.

Jim Sensenbrenner of Menomonee Falls said, "Term limits take away the right of voters to re-elect the representatives they choose. Effective leadership does not have an expiration date."