Calling Scott Walker a big government Republican wasn't just my way to slam our sociopathic governor, I honestly meant it after seeing how quickly he signed away local control.

But that's not what happened say Wisconsin principals:

Some 35 school principals from Wisconsin have sent a letter to Gov. Scott Walker — who is running for the 2016 Republican presidential nomination — saying that state education policies and budgets are hurting their schools. And they told Walker that his war on “big government” isn’t really returning power back to the people but actually making it harder for communities to have a say in local education decisions.

The principals said they're concerned about how changes passed under Walker forcing schools to compete will result in more segregation. The model will result in an exclusionary system between the "haves and have nots," they wrote. And they point to how Walker has pledged to reduce big government, yet they feel power "of the people, by the people and for the people" is less in the people's hands than it once was.

"The people in local communities have far less voice today than they did only a few decades ago," the letter states, saying that school boards have less power now to make policy, funding and testing decisions. "Since the onset of revenue limits in 1992, our school districts have been reducing and eliminating programs and resources. We are burdened by the cumulative effects of budget cuts resulting in increased class sizes, cut programs and deferred maintenance plans."

Something I didn't see coming was this: Republicans are now quietly separating out school funding, slipping more money to rural districts, their voting base.  Don't get me wrong, they need the help, but so does every schools across the state. But this is ripe for abuse and voter bribery. From WISC: 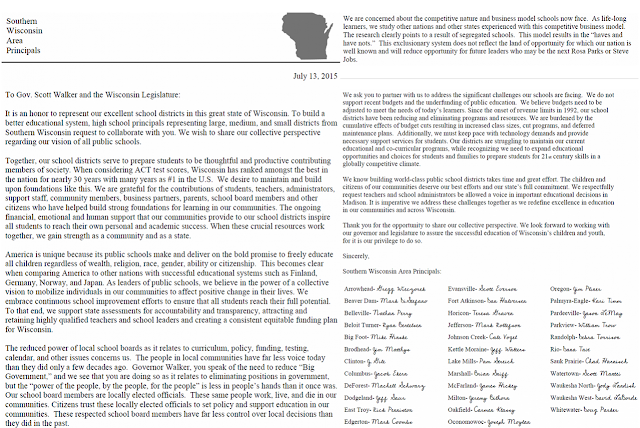