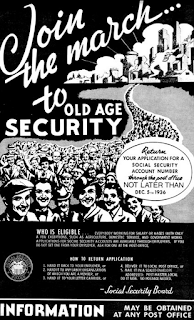 Huffington Post: According to the Republican critics at the time, the new liberal retirement program was "socialism." They said that it would a job killer, the death knell of democracy and the end of American prosperity.

Republican presidential candidate Alf Landon said that it was "a cruel hoax" and "a fraud on the workingman. One GOP Representative from New York suggested that the new law was purposefully designed "to enslave workers, and to prevent any possibility of the employers providing work for the people." Another intoned ominously that "the lash of the dictator will be felt."

It all sounds oddly current and familiar. But it happened decades ago when Social Security was first proposed. Social Security was signed into law 80 years ago by President Franklin Delano Roosevelt on August 14th, 1935. But it was Frances Perkins, the first female Secretary of Labor and cabinet member, who was the driving force behind the creation of the program.

Republicans claimed that the law was unconstitutional. And several lawsuits eventually made their way up to the Supreme Court. President Franklin Roosevelt was able to see the results first hand of that extended experiment in "smaller government." And as he remarked in his second inaugural address:


"I see millions of families trying to live on incomes so meager that the pall of family disaster hangs over them day by day.

I see millions denied education, recreation, and the opportunity to better their lot and the lot of their children.

I see one-third of a nation ill-housed, ill-clad, ill-nourished."