Walker: "America must be, not only the land of the free, but the home of the brave. An America that is unintimidated."

Some in the media have already declared him a “dictator in waiting.” Walker already said we need a foreign policy "that puts steel in the face of our enemies."

We’re now at that moment of clarity. In a foreign policy speech at the Citadel in South Carolina, Scott Walker, career politician and foreign policy dufus, gave us all a glimpse at how he would eventually become ruler of the world:

"As president, I will send the following message: The retreat is over."

"America will not be intimidated. And neither will I."

"How can we possibly deter our sophisticated adversaries in Eastern Europe and our competitors in the South China Sea if we cannot defeat the barbarians of ISIS and roll back the theocrats in Tehran?"

"Clearly, we can no longer afford to be passive spectators while the world descends into chaos."

"Confronted by these two forms of evil, President Obama and Hillary Clinton seem somehow to believe they can sit on the sidelines, hoping Iran will defeat ISIS for them. They fail to realize that, in this prevailing anarchy, the two sides feed off of each other, growing stronger at the expense of our Sunni and Shia allies trapped in the middle."

In an even more frightening threat, especially after seeing Walker destroy his political opponents in Wisconsin, he wants to continue surveilling every American citizen: 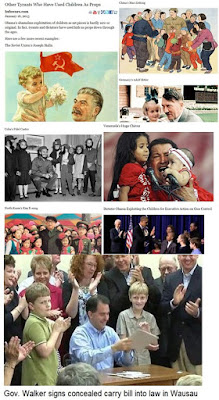 He said the nation must "restore counter-terrorism and surveillance programs," drawing a sharp contrast with U.S. Sen. Rand Paul of Kentucky, a presidential rival who has said the government's bulk collection of data violates the constitutional rights of everyday Americans.

Despite warnings against fostering the military industrial complex, Walker would double down on his preparations for preemptive wars:

Saying the U.S. military has been weakened by budget measures, Walker called for reversing that trend, saying that defeating ISIS and containing Iran would require a "greater investment of U.S. resources."

Our frightened little governor's preoccupation with tourism...ah, I mean terrorism, should give some pause:

Walker misspoke a couple of times. He quickly corrected himself after saying "tourism" instead of "terrorism" and he garbled what was to be one of his more memorable lines. Walker was to say,


"Yes, the world is complex, but some things are simple: There is good and there is evil."

"Yes, the world is complex, but there are simple things out there: There is good and there is bad."

God will someone wake me from this Walker nightmare? Here are the more jaw dropping moments:

And from someone who's been there before, came this assessment of Walker's world conquest ambitions: Former Secretary of State Madeleine Albright, who served under then-President Bill Clinton, disagreed in a recent opinion column:

"Today, America's place in the world is far stronger than it was in 2009 thanks to the leadership of President Obama and former Secretary Clinton. They renewed alliances, relentlessly pursued our terrorist enemies, and forged international coalitions on Iran sanctions and on the fight against climate change."