The health care reviews are in, and thank god, reporters everywhere are starting to catch on to how draconian and elitist Scott Walker's and Marco Rubio's plans are.

First, I think the following Bobby Jindal statement says it all about the ruthless detached anger sweeping the Republican Party today. This is third world stuff. It's the best example of the almost Hunger Games-like attitude Republicans have about their vision of society:

Jindal: “In Governor Walker’s plan, a new entitlement is created for every single American human being from the time they are born right up until they grow old and become eligible for Medicare. It is frankly shocking that a Republican candidate for President would author a cradle to grave plan like this. When did conservatism die? When did we accept the idea of dependence on government?" 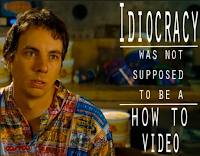 Flip Flop on Means Testing; "Stand with Walker" supporters are cheering for a plan that does what they are now complaining about, using taxpayer money via the big federal government. More oddly, the Republican plan does the opposite of what they've been trying to do with Social Security and Medicare; means test it. Age not Income: Tax credits will be given out based on age, and not the GOP's favored means test. And seriously, what insurance company isn't going to build in the rates doled out by the government, since the dollar amount is a specific unchanging number? The tax credits in some ways exceeds the ACA's credits (which also include cut off points, Walker's doesn't), but what you get and have to pay for cost more money. There is no cost containment either, something we're seeing a little of in ObamaCare.

But that's just a small sample my own criticisms. Here are a few other insights:


Huffington Post: Walker's plan -- "The Day One Patient Freedom Plan" -- is a patchwork of recycled health care proposals that various Republicans have put forth over the years, none of which the party has been able to coalesce around in Congress.


Walker's "tax credits at the level proposed would not begin to cover the cost of decent coverage. There is not a new idea in here." ... let health insurers sell plans across state lines ... critics fear it would motivate insurers to migrate to the states with the least regulations and sell the more bare-bones policies across the country.

Many states already have high-risk pools, but they haven't worked well because, due to the fact that they cover many poor and sick people, they have high costs and are generally underfunded.

Functioning high-risk pools are very expensive, as are his proposed tax credits. That's a tall order for a plan that eliminates the $1 trillion in largely upper-income taxes imposed by Obamacare, and in a Congress run by anti-spending Republicans ... plans like this would upend coverage for a lot of people."

LA Times: Walker's healthcare plan is perfect, if you want almost no insurance at all: The loopy irrationality of this proposal can be seen if one contemplates that a 30-year-old millionaire would receive the same grant ($1,200) as one earning $20,000. Under the ACA, the latter would receive $1,939, on average. Walker also puts in a plug for workplace wellness programs ... the danger is that they'll be used by some employers to harass and punish unwell members of their workforce. So if you want to buy health insurance with no standards whatsoever, Walker's your man.

The Week: What Scott Walker and Marco Rubio don't want you to know about their health care plans: Incentives for providers to move away from a fee-for-service model, which encourages lots of spending, and toward a model that pays them for keeping the patient healthy, reducing hospital readmissions, and so on … all those providers that have spent a couple of years changing how they operate would now have to change back. The millions of people who are now on Medicaid because of the law's expansion of the program would immediately lose their insurance. The millions who got coverage through the health care exchanges would probably also lose their coverage, because the exchanges would cease operating, and the plans that insurance companies designed with the ACA's regulations in mind would likely be eliminated. Those who rely on the ACA's subsidies would, under both Walker and Rubio, get a tax credit — but in many cases one less generous than the subsidy they're getting now, making insurance unaffordable again.

Voxdotcom: Marco Rubio's Obamacare replacement plan: Under Rubio's plan, pretty much everyone — workers, seniors, the poor — will pay more for the health coverage they currently receive. When people have less insurance … people won't just cut out unnecessary care — they'll lose access to medical care that they do really need and could potentially die without.

Two more takes that I thought were important:


Forbes: The Wisconsin governor says he’d help make insurance affordable with refundable tax credits and expanded health savings accounts. The credits would increase from $900 for those up to age 17 to $3,000 for those 50-64. They’d be available for anyone without employer-sponsored health insurance.

For context, the Obama Administration estimates the average premium subsidy for those buying on the exchange this year was about $3,100. Thus, Walker’s highest credit would be lower than the average ACA subsidy. And, like most credits, they come with a cash flow problem. That fry-cook has to pay his premiums monthly, but won’t see cash from the credit until after he files his tax return. In addition, Walker does not say whether his credits would be indexed for medical inflation. If not, their value would decline rapidly as premiums rise with health costs.

Walker would also raise contribution limits for HSAs (and allow unused funds to pass to surviving children, parents, or grandparents). But it’s hard to see how more generous HSAs would help that low-wage worker. He’s unlikely to have discretionary income to fund a tax-advantaged health account and would not benefit from the exclusion from taxable income since he already owes no income taxes. Walker’s health plan would add hundreds of billions of dollars in new tax preferences to the Code. Not exactly Reaganesque.

Walker does not say how he’d pay for the credits and expanded HSAs. The Congressional Budget Office estimates that repealing the ACA alone would increase budget deficits by $137 billion over 10 years.