While Iowa Protester was Attacked, Walker Bragged he wasn't Intimidated!!!

It was a little out of character, but Scott Walker needed a boost in the polls.

When the news broke about Scott Walker's egomaniacal attacked on a few protesters in a small crowd at the Iowa State Fair, I had a chance to ask my conservative friend in Milwaukee what he thought; do people have a 1st Amendment right to redress their government if they disagree with policy, or are they now seen as disloyal Americans, trying to "intimidate" their political leaders? 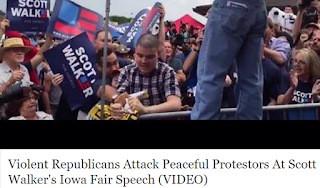 Without hesitation he said it was intimidation, just like Walker. Another real constitutional scholar. And since it is intimidation, Walker no longer has a responsibility to listen to those now vilified dissenters. It's a perfect example of rightwing authoritarianism.

In Wisconsin, Walker typically avoids public confrontations with scheduled appearances closed off to all but his corporate supporters and captive employee audiences.

Walker's outburst was calculated to play off his book (boost sales?), and play up his reputation for taking on hundreds of thousands of Wisconsinites in the dead of winter who protested his "divide and conquer" agenda.


Published on Aug 17, 2015: At the Iowa State Fair Soapbox, Governor Scott Walker brings the crowd to a thunderous applause when he says he is unintimidated and a proven, tested leader.

The funny irony? Walker bragged about standing up to 100,000 taxpaying American people, because he wants to "fight for the American people." You can't make this stuff up folks. Here's a more complete look at Walker's attack:

"Go get 'em, Scott!" a supporter screamed in response.

I also included Walker bragging about freezing tuition for the last 4 years, as if that's any kind of solution to rising college cost. Oh, and he blamed Hillary's speaking fees for skyrocketing college costs. He really did.

The press gave little attention to the scuffle caused by our brownshirted constitutional conservative freedom fighters trying to rip the protesters sign apart. So much for free speech. Special Note: The Walker thugs against political speech should be charged for disorderly conduct and vandalism, just like a Germantown kindergarten teacher was for a similar offense, which was written about for months in the Wisconsin Watchdog:


UPDATE: Now we know more about the confrontation Walker never tried to stop or defuse:


More video @GovWalker points and his supporters pounce. @AddInfoOrg ‪#‎iacaucus‬"Unfortunately for Walker, those protestors happened to be Addicting Info proprietor Matthew Desmond and two of his friends, Aaron Black and Khalil White. Matthew explained what happened to him and his friends as they stood peacefully protesting Walker in the front row:

“I was holding up [a] sign, wasn’t yelling at him, but he was screaming at us and his supporters attacked us. We [he and Aaron Black] were both attacked and had our signs ripped up. I kept pulling out more from my pocket and one guy attempted to climb on a hay bale and dive bomb me. They pushed my friend Khalil White, who has a torn meniscus in his knee, and ripped up his sign. Then they pushed me over, at one point, onto a woman in a wheelchair.”

As Charles Pierce recently wrote: Scott Walker's Lies at the Fairgrounds - Scott Walker and his campaign's toxic combination of belligerence and aggressive victimhood were on display:

Alone among the crowd of candidates, Walker most clearly is running on his record of being a complete prick to the right people – which include teachers and nurses and the people who clean up after Alzheimer's patients in group homes. He truly is a remarkable liar, already a far more remarkable liar than even Mitt Romney was, and I didn't think that was possible. For example, the evidence is that while he managed to ram his programs through his pet legislature, he hid behind his capitol police. He took a tunnel to get to the office. He and his pet legislature changed the rules of what was allowed in the Wisconsin capitol building, which always had been open space. He was unintimidated by singing grandmothers because his administration had them arrested and hauled away.​

And, it scarcely needs to be mentioned, when 100,000 of his constituents showed up on his lawn, Scott Walker did not deign to meet with them.

(And, you have to admit, it takes some big clanging brass ones to talk about "taking on the big special interests" a couple of weeks after giving $250 million of that sweet taxpayer cash to the owners of the Milwaukee Bucks, to say nothing of riding to victory three times on tidal waves of dark money.)​