Republican hypocrites demand Clinton apology for saying their "views about women" similar to "some of the terrorist groups."

Who can forget this vilification of American protesters exercising their 1st Amendment right to redress their government:

Walker: “We need a leader with that kind of confidence. If I can take on 100,000 protesters, I can do the same across the world."

That was just fine with rank and file Republican voters. There were no objections or apologies. And yes, Walker compared Wisconsin protesters to ISIS.

So what are our hypocritical Republican "war on women" warriors saying: 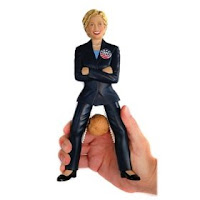 “For Hillary Clinton to equate her political opponents to terrorists is a new low for her flailing campaign. She should apologize immediately for her inflammatory rhetoric,” said Republican National Committee Press Secretary Allison Moore.

Do Republicans really want to go there? Of course.

Salon's Joan Walsh went a little deeper into Walker's bizarre comparison that his clueless supporters deny to this day, as shown in these tweets. Just to be clear, many of the protesters weren't in unions and showed up supporting WORKERS in general:

“You all will misconstrue things the way you see fit. But I think it’s pretty clear, that’s the closest thing I have in terms of handling a difficult situation, not that there’s any parallel between the two.”

He made a similar argument at the New York event where Rudy Giuliani upstaged him … according to Larry Kudlow, an event co-sponsor:

"Walker argued that when Reagan fired the PATCO air-traffic controllers over their illegal strike, he was sending a message of toughness to Democrats and unions at home as well as our Soviet enemies abroad. Similarly, Walker believes his stance against unions in Wisconsin would be a signal of toughness to Islamic jihadists and Russia’s Vladimir Putin."

"That is a terrible response. First, taking on a bunch of protesters is not comparably difficult to taking on a Caliphate … Secondly, it is insulting to the protesters, a group I take no pleasure in defending. The protesters in Wisconsin … they’re Americans, and as much as we may find their ideas, worldview, and perspective spectacularly wrongheaded, they don’t deserve to be compared to murderous terrorists."