Walker's inane nonsensical Tweets are crazy, if not just flat out dishonest!!!

Scott Walker continues to use Obama's national economic policies to boost his own failed performance and image in the state. We'll see more of this if what I read someplace is true; that only 39% would reelect Walker as governor.

The only thing Walker can state for real are the unemployment numbers, which by the way are rising, getting worse...oops; from 4.5 to 4.6%. Obama's unemployment stat depends a great deal on GOP states functioning correctly, employing people, which they're not. Obama's numbers look good, but could be better if not weighted down by austere Republican state policies.

And Walker thinks we're dumb enough to believe he can make such a comparison, especially after making unemployment harder to get and kicking everyone else off.

His tired old meaningless graphic drives me crazy. Is he that dishonest or what? I'm posting it here because it should embarrass him and his campaign on a more national level:
: 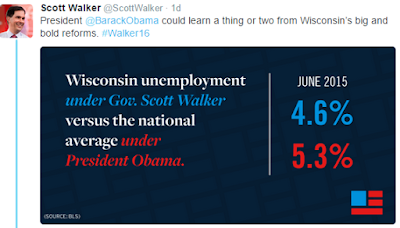