I think the following Scott Walker suggestion is taking anecdotal advice to a whole new level.

It looks like a few far right scaredy-cats got a little face time with Walker, and are now getting some traction by our pandering presidential wannabe. I wish I were kidding:

Republican presidential candidate Scott Walker says that building a wall along the country's northern border with Canada is a legitimate issue that merits further review. The U.S.-Canada boundary is the longest international border in the world at 5,525 miles long. Walker says law enforcement officials in New Hampshire brought up the topic of building a wall along the U.S.-Canadian border during a recent town hall meeting. He says they raised some legitimate concerns, so it's a "legitimate issue for us to look at."

Yes, it's very legitimate to Scott Walker, but mind numbingly bizarre for the rest of us. What next, underwater electronic nets spanning the Great Lakes too?

After hearing conservative radio callers insist that's not what Walker said, I thought it best to read his very unambiguous comment:


“Some people have asked us about that in New Hampshire. They raised some very legitimate concerns, including some law enforcement folks that brought that up to me at one of our town hall meetings about a week and a half ago. So, that is a legitimate issue for us to look at.”

And in classic Walker fashion, the media is accused of picking on poor victimized Scott Walker ...


“Despite the attempts of some to put words in his mouth, Gov. Walker wasn’t advocating for a wall along our northern border,” Walker spokeswoman AshLee Strong said in a statement.

But Walker isn't the only one easily distracted by the loony right:


New Jersey governor Chris Christie, on Saturday told an audience in New Hampshire he would ask the chief executive of FedEx to devise a system to track illegal immigrants like packages.

I thought the comment from Canadian spokeswoman Christine Constantin said it best: 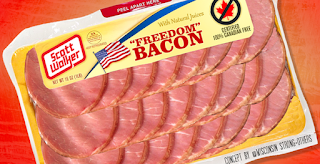